The basic steps in building a FEMWATER model include:

For models with simple geometry and boundary conditions, the entire model can be constructed using the tools and commands in the 3D Mesh module. With this approach, the editing of the FEMWATER data is performed directly on the nodes and elements of the mesh. The first step is to create a 3D mesh covering the model domain using the mesh building tools in the 3D Mesh module. The boundary conditions and source/sink terms are then assigned by selecting nodes, elements, and element faces and assigning values directly to the selected objects. The model is then saved and FEMWATER is launched.

The first step in performing a FEMWATER simulation is to create a 3D finite element mesh. The volumetric domain to be modeled by FEMWATER is idealized and discretized into hexahedra, prisms, tetrahedra, and or pyramids. Elements are grouped into zones representing hydrostratigraphic units. Each element is assigned a material ID representing the zone to which the element belongs. When constructing a mesh, care should be taken to ensure that elements do not cross or straddle hydrostratigraphic boundaries.

The most efficient method for constructing a 3D mesh for FEMWATER is to use the conceptual model approach. The FEMWATER conceptual model can be used to automatically build a 2D mesh that matches the model boundaries and is refined around wells. This mesh can then be extruded into a 3D mesh.

Solids can also be used to make a structured mesh. This is accomplished with the Solids → Layered Mesh command in the Solids menu.

A FEMWATER model can be created in GMS using one of two methods: assigning and editing values directly to the nodes and elements of a mesh (the direct approach), or by constructing a grid-independent representation of the model using feature objects and allowing GMS to automatically assign the values to the nodes and elements (the conceptual model approach). Except for simple problems, the conceptual model approach is typically the most effective. 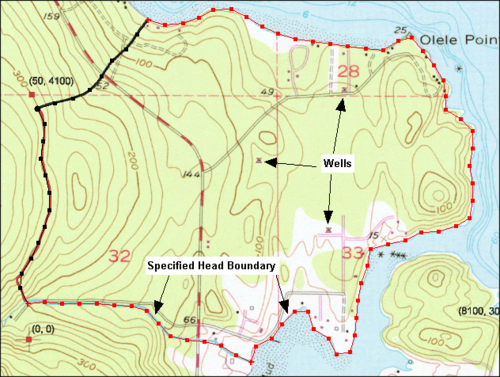 A FEMWATER conceptual model is used to build a numerical model using a two step process.

To create a FEMWATER conceptual model:

Once the FEMWATER conceptual model is constructed, the next step is to use the conceptual model to build a 3D finite element mesh. This is accomplished by first building a 2D mesh, then building the 3D mesh by extruding each of the 2D elements in 3D elements.

The first step in building the 3D mesh is to select the Feature Objects | Map → 2D Mesh command. This command creates a 2D mesh by automatically filling in the interior of the conceptual model with nodes and elements. The size and spacing of the elements is controlled by the spacing of the vertices on the arcs and by the refine point attribute assigned to any wells in the interior of the conceptual model.

Once the 2D mesh is created, the next step is to create the 3D mesh by extruding each of the 2D elements into a series of 3D elements. The elevations of the 3D elements can be defined from a set of boreholes, a set of TINs, or a set of Solids.

For sites with relatively simple stratigraphy, the Regions → 3D Mesh command in the Borehole module can be used.

For sites with more complex stratigraphy, the TINs → 3D Mesh command in the TIN module should be used.

A mesh can also be created using the Solids → Layered Mesh command in the Solid module.