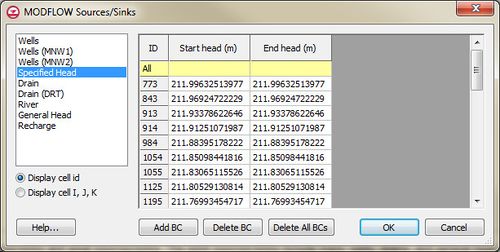 A new instance of a source/sink of a particular type is created by selecting the Add button for the type. This creates a new source/sink and displays a default value or set of values for the source/sink in the edit fields on the right side of the dialog. If the simulation is steady state, normal edit fields are used to enter the values. If the simulation is transient, buttons appear which can be used to bring up the XY Series Editor. A value is entered for each of the defined stress periods.

Multiple instances of a source/sink can be created by repeatedly selecting the Add button. Each cell can contain multiple sources/sinks of a particular type or a mixture of several types.

Several of the parameters shown in the Point Sources/Sinks dialog, such as elevation and conductance, are not likely to change during a transient simulation. A constant value can be entered for these parameters in the XY Series Editor and the resulting curve is a flat line.

If the Recharge package has not been activated (using the Packages dialog which is accessed through the Global Options\Basic Package dialog) the Recharge portion of the Areal Sources/Sinks dialog is dimmed. Likewise, if the Evapotranspiration package has not been activated, the Evapotranspiration portion of the dialog is dimmed.

The edit fields to the right of each option are used to enter the values of the parameters associated with each type. The fields are standard edit fields if the simulation is steady state and are graphic windows displaying a time series if the simulation is transient. Clicking on the window brings up the XY Series Editor. The XY Series Editor is a general purpose editor for entering curves or lists of pairs of data (e.g., rainfall rate vs. time). Once a curve is defined in the editor, it is displayed graphically in the window.

After a set of source/sink parameters has been defined, it is often necessary to change one of the parameters of a subset of the cells (vertical columns).

For example, suppose the Evapotranspiration package has been activated and each vertical column was assigned a unique value of elevation, extinction depth, and maximum evapotranspiration rate. Suppose that it becomes necessary to change the extinction depth of a large subset of the vertical columns to a constant value while leaving the other parameters unchanged. The Areal Sources/Sinks dialog has been designed so that it can be used to change one of the parameters without altering the other parameters.

If more than one cell is selected when the Areal Sources/Sinks dialog is brought up, the available edit fields appear with a checkerboard pattern if the values in the cells are not all identical. Before editing a parameter, click on the field to switch it from multi-select mode to normal mode. When the OK button is selected after the parameters have been edited, only the parameters that have been selected are changed. For example, in the case of changing the extinction depth, if the extinction depth is edited, the extinction depth of all of the vertical columns associated with the selected cells is changed to the new value but the individual values of elevation and maximum evapotranspiration rate are left unchanged.