PEST provides an additional option for the pilot point method called “regularization”. Regularization imposes an additional measure of “stiffness” to the parameter being interpolated via a “homogeneity” constraint. In the absence of any strong influence from the PEST objective function, this constraint causes values at pilot points to approximate the mean value of adjacent pilot points. This constraint makes the inversion process much more stable and makes it possible to violate one of the typical constraints associated with parameter estimation: namely, the requirement that the number of parameters must be less than the number of observations. With regularization, the number of parameters can greatly exceed the number of observations. As a result, complex hydraulic conductivity distributions can be defined, resulting in extremely low residual error. The pilot point method with regularization is an incredibly powerful feature of PEST. (For more on PEST see Automated Parameter Estimation) 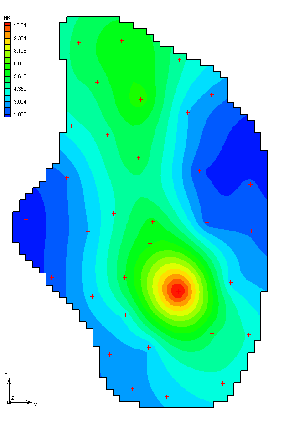 Kriging and IDW are the only interpolation options supported with pilot points. The kriging option requires the establishment of a model variogram (by creating a nested structure). The nodal function options in the IDW method are not supported because those schemes compute gradients based on the data set values at the surrounding points. With the pilot point method, the values at the points will change during the inversion process, thereby rendering the previously computed gradients inaccurate.

For pilot point interpolation of hydraulic conductivity, it is sometimes useful to include one or more measured K values with the pilot point set. These measured values could represent K values extracted from a field pump test. The Pilot Point Conditioning option is available to represent this scenario. One of the properties associated with scatter points is a Fixed pilot point toggle. If this toggle is on and the corresponding scatter point set is used for pilot point interpolation, the K value assigned to the point is not allowed to vary during the parameter estimation process.

Guidelines for Placement of Pilot Points

Note: The recommended maximum number of pilot points is about 200.