Difference between revisions of "GMS:Subset Definition"

If the Use subset of points option is chosen, the Subsets button can be used to bring up the Subset Definition dialog. Two options are available for defining which points are included in the subset. In one case, only the nearest N points are used. In the other case, only the nearest N points in each quadrant are used as shown below. This approach may give better results if the scatter points tend to be clustered. 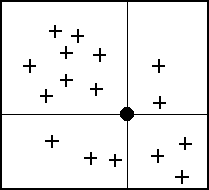 If a subset of the scatter point set is being used for interpolation, a scheme must be used to find the nearest N points. Two methods for finding a subset are provided in the Subset Definition dialog: the global method and the local method.