Most of the SMS modules have a Data menu, but the items in this menu are different for each module.

The following models have specific commands included in the Data menu.

Each cell corner in the grid is converted to a scatter vertex. SMS computes one dataset from the elevation dataset of the grid and one dataset for each functional dataset on the grid. If the Cartesian grid is cell centered (data at the center of the cell), SMS averages the values of the four surrounding cells to compute a value for the scatter set vertex. If the Cartesian grid is a mesh centered grid (BOUSS2D), SMS assigns the value from the cell corner to the scattered vertex.

Each cell in the grid is converted to two triangles in a TIN.

This command allows the visualization of the data on a matching geometric object. 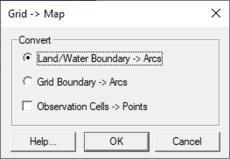 The Grid → Map command in the Data menu (Cartesian grid module) is equivalent to the 2D Grid → Map command in the right-click menu on a grid object in the Project Explorer. It is used to convert attributes of the Cartesian grid into feature objects on a coverage (map module). All generated features are added to the current or active coverage. If a new coverage is desired, it should be created prior to issuing this command.

The command includes the following options:

This option generates a feature arc along all cell edges of the boundary of the Cartesian grid.

This option can be applied to either arc generation option above. It only applies to Cartesian grids that support the cell attribute of observation cells. If this toggle is selected, a feature point is created at the centroid of each cell with the observation point attribute.

This command has minimal usefulness since the feature objects generated are step functions. It is recommended that other data sources, such as a scatter set or a shapefile be used to define these features, but if only the numerical model exists, this command can be used to help construct a conceptual model.

Each cell in the grid is converted to two triangular elements.

This command allows the visualization of the data on a matching geometric object.

The Switch Current Model command brings up a Select Current Model dialog. This dialog can only be used when a grid does not currently exist. 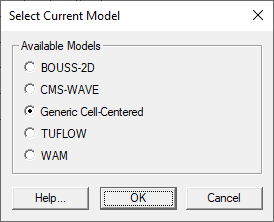 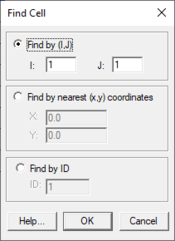 The Find Cell command from the Data menu is used to locate a cell either with a specific i,j location, or near a specific location. When this command is executed the Find Cell dialog opens.