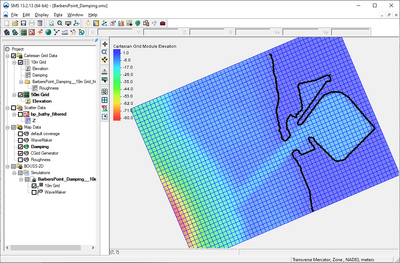 It is strongly recommended that grids be created through the Map Module. The grid module currently includes interfaces for: 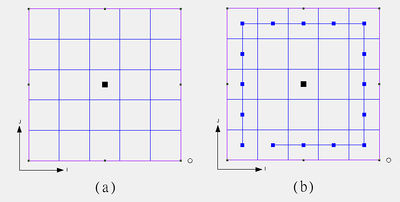 Multiple types of grids are supported in the 2D Grid module because each numerical engine has its own limitations and supported features. Variations include:

Previous versions of SMS supported limited options for refining a Cartesian grid. This has been replaced in version 12.0 and newer with Telescoping or QuadTree grids. The CMS-Flow engine utilizes this domain. In this geometric object, specify a constant resolution grid as a background grid (either number of rows/columns or a fixed width/height), and then specifies refinements as a maximum allowable dimension in a polygonal zone.

When creating the CGrid Generator coverage from the New Coverage dialog, the Select Grid Type dialog will appear before the coverage is created in the project explorer. This dialog gives the option to create the coverage as "Cell-centered" or "Mesh-centered". The selection should depend on which model the feature objects will be used in after conversion to the Cartesian Grid module.

The type and orientation of the grid generated is controlled by the current Cartesian Grid Model.

If the grid is intended for CMS-Flow, and telescoping resolution is specified in at least one feature polyon, SMS will generate a recursively refining grid based on the input parameters.

2D Grids may be converted to other types of data used in SMS, such as a Scattered Dataset of 2D mesh. 2D Grids can be converted by right-clicking on the grid in the Project Explorer.

Right-clicking on the Cartesian Grid module root folder in the project explorer invokes an options menu with the following options:

Right-clicking on a Cartesian Grid item in the Project Explorer invokes an options menu with the following module specific options:

Opens the Create Transformed Grid dialog. Creates a copy of the grid with a rotated origin. Used to change the I direction for wave models.

To learn more about how to use the Cartesian Grid Module go to the Tutorials section of the Aquaveo website at: http://www.aquaveo.com/software/sms-learning-tutorials.