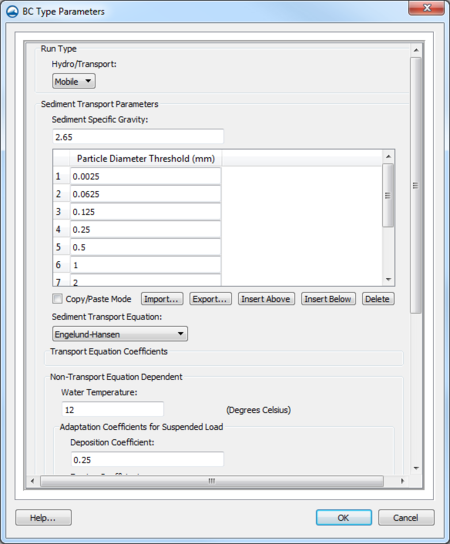 The Sediment Specific Gravity option has a default value of "2.65".

A simulation can be specified for only size class (bin) that represents a uniform size class, though several grain sizes are recommended. More size classes significantly increases the simulation time. The pre-processor suggests a limit of seven sizes classes, but the absolute limit is nine. If the cohesive sediment transport modeling is being performed, then the first size class (i.e. smallest sediment size) represents the cohesive size fraction.

The predicted sediment transport rates are sensitive to the number of sediment bins. It is recommended the user perform sensitivity analyses to evaluate the variability of the model output. Sediment transport calculations within SRH-2D use the geometric mean of each size class.

Note: the maximum number of bin sizes in SRH-2D is nine (ten particle sizes); the more bin sizes, the longer the simulation time.

There are seven sediment transport equations available in SRH-2D including:

There is also an option to apply two sediment transport equations simultaneously using the "Mixed" option; A particle size class cutoff is specified between the two equations. For example, the Engelund-Hansen (1972) equation could be applied for sizes up to 2 mm and Parker (1990) equation for sizes greater than 2 mm. However, the Size Class associated with 2 mm is input rather than the actual particle size.

Specifically, for the particle classes defined in the figure of the dialog above, Size Class 6 is defined between particle size 6 (1 mm) and particle size 7 (2 mm). So by specifying the "Sediment Size Class Cutoff" to be 6, the first 6 size classes, up through 2 mm, would be computed with one equation and the remaining size classes would be computed with the second equation. This method has been applied in conditions where a significant suspended load component (i.e. silts and sands) is transported in a predominately gravel-bed river.