The WMS software development team is excited about the release of WMS 9.0! This page lists the exciting new features that have been added to WMS 9.0. 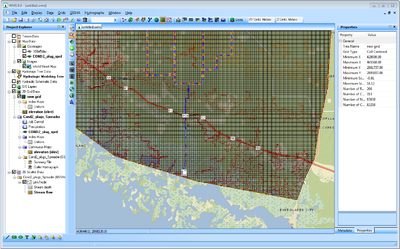 The NSS (National Streamflow Statistics) interface has been updated to use the latest NSS database. The MODRAT interface has also been updated. Renumbering has been improved in the MODRAT interface and several issues have been fixed. Several new features and enhancements have been added to the GSSHA interface. First, the storm and tile drain modeling capability of GSSHA has been improved by adding the capability to add multiple pipes in a "superlink", which represents a network of pipes in GSSHA. The algorithm for determining embankments has also been reworked to make the algorithm more efficient and more accurate. The GSSHA tutorials have also been updated and improved to include the latest enhancements in the GSSHA code. Also, GSSHA itself has been reworked to make the program more stable. 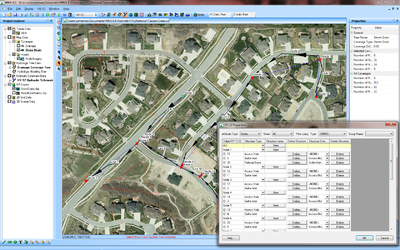 The HY-12 model is a storm drain model developed by Aquaveo and the FHWA (US Federal Highway Administration).

The online image capabilities in WMS 9.0 allow you to view and use a map showing any part of the world with your data. 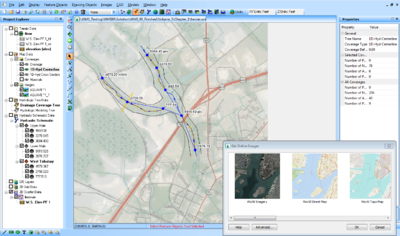 The online image capabilities in WMS 9.0 allow you to download and use georeferenced images for any part of the world with your data.

in the Get Data Toolbar

. This tool allows you to open a web map service as an "online image" and use it as you would any other image in the WMS interface. Since the web can be a little slow, there is an option to convert the online image to a static (locally saved) image that is saved with your WMS project and that displays much faster than the online image. 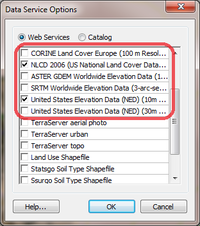 Six new web service data sources are available in WMS 9.0. These services allow you to download data for many parts of the world.

. These web services include some that were previously available, such as United States National Elevation Datasets, as well as newly available datasets, such as the CORINE European land cover database, the NLCD US National Land Cover database, and the ASTER Worldwide Elevation Data database. These new datasets are much faster than previously available datasets and include a progress bar so you can view the progress of your data download. 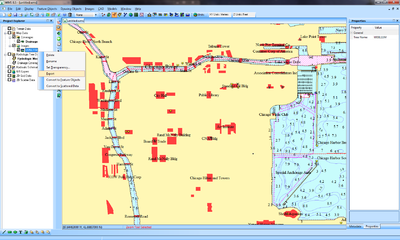 You can read and display almost any commonly used vector data source as a vector image in WMS.

We have added support for almost all the commonly used vector file formats in the new version of WMS. Some vector files, such as DXF, DWG, and ESRI Shapefile format, still read the way they have always read into WMS. But support for "Vector-based images" has been added to WMS that allows you to read any file that can be read using the Global Mapper software in WMS (A license to Global Mapper is not required). For a complete listing of the vector formats supported in WMS, visit the Global Mapper web site. Right-clicking on a vector image allows you to export to one of many formats or convert linear data to feature objects or scattered data (XYZ). The following formats can be exported using the right-click command:

The FHWA's HY-8 7.3, which includes many new culvert modeling capabilities, is supported in the new version of WMS. The new version of the FHWA's Hydraulic Toolbox (3.0) is also supported with the new version of WMS. The new tools in HY-8 7.3 include modeling of hydraulic jump profiles, broken back culverts (culverts with a change in slope), and horizontal and adverse slopes in culverts. Documentation showing the capabilities included in the latest version of HY-8 is included on the HY-8 wiki. The newest version of the hydraulic toolbox includes tools for culvert assessment and for determining a riprap or streambed gradation curve using a digital image.

To view the list of bugs fixed in WMS 9.0, visit the WMS bugfix page.