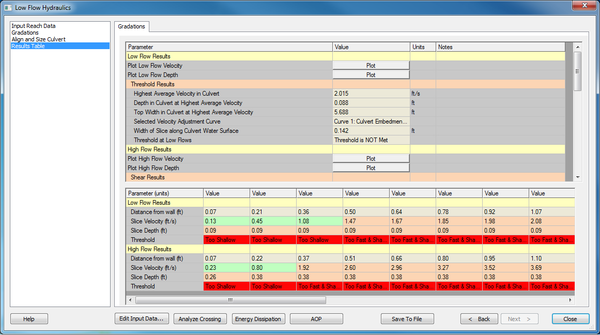 The purpose of this dialog is to report to the user most of variables used in the computations to verify that the results and process are reasonable.

The user can plot the velocity and depth across half of the span of the culvert (from the wall to the center) for the low and high flows by clicking the buttons below the respective flow heading. The threshold results are then given displaying the highest average velocity, the depth at that location, the top width, the velocity adjustment curve that was selected, the width of the slices, and whether the threshold is ever satisfied.

If a gradation is included, the table also includes shear results. The equations used to perform these calculations are available in HEC-26 Chapter 7. It reports the energy slope used, the D50 of the gradation used, the v*, Reynold's value, and Shield's value for the shear calculations and the resulting shear computations.

The threshold inputs are also included at the bottom of the table.