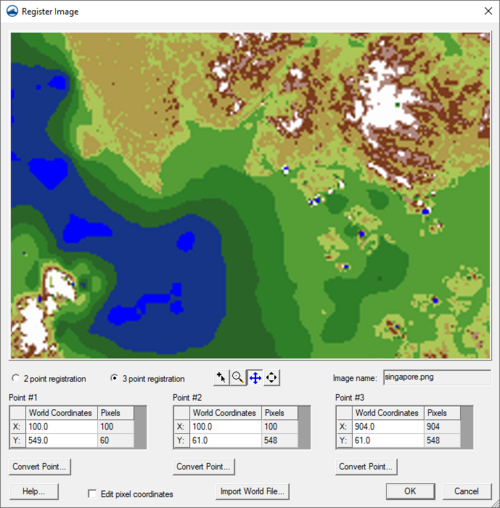 Example of the Register Image dialog.

If an image file is not geo-referenced then it's necessary to define the coordinate system of the image. The Register Image dialog allows specifying the coordinate system for the image. When an image is opened, if the image is not self-referenced, XMS attempts to find world file with the same name as the image (*.wld or *.jpgw extension). If neither of these is found, the Register Image dialog opens.

What is Image Registration?

Before an image can be displayed, the image must be "registered" or geo-referenced. Registering an image involves identifying points on the image corresponding to locations with known real world (XY) coordinates. Once these points are identified, they are used to scale and translate the image to the proper location when it is drawn with the other objects in the Graphics Window. If an image is not registered properly, any objects which are created using the background image as a guide will have the wrong coordinates.

The following tools can be used to help position the registration points:

When a project file is saved, a link to the image is saved in the project file, along with the current image registration information so that the image is re-registered to the same coordinates every time the project is opened. The original image file and world file (if one exists) are not altered.

The x, y coordinates of each register point must be specified. If there are (x,y) coordinates in a different coordinate system than the project, the coordinates will need to be converted.

The Convert Point button in the image registration dialog will allow converting the coordinates.

The Single Point Conversion command in the Edit menu can be helpful if it becomes necessary to convert between any two coordinate systems. Perform this conversion and record the locations in the correct coordinate system prior to entering the registration dialog.

An alternative approach is to convert the coordinate system after importing by right-clicking on the image in the Project Explorer and choosing Coordinate Conversion from the right-click menu.

The Single Point Conversion command in the Edit menu can be helpful if it becomes necessary to convert between any two coordinate systems. Perform this conversion and record the locations in the correct coordinate system prior to entering the registration dialog.