ZONEBUDGET is USGS program that reads cell to cell flow data produced by MODFLOW and calculates water budgets for subregions of the modeled area. GMS has an interface to ZONEBUDGET available from the MODFLOW | Flow Budget menu command. This command brings up the Flow Budget dialog and one of the available tabs in the dialog is USGS ZONEBUDGET. GMS supports version 3.01 of ZONEBUDGET.

When the user brings up the ZONEBUDGET tab they will be analyzing the CCF (Cell-to-Cell Flow) file from the active MODFLOW solution. All ZONEBUDGET inputs and outputs will be written to the same location as the CCF file.

GMS has its own internal tools for analyzing CCF data. These tools are explained the article Zone Budget. 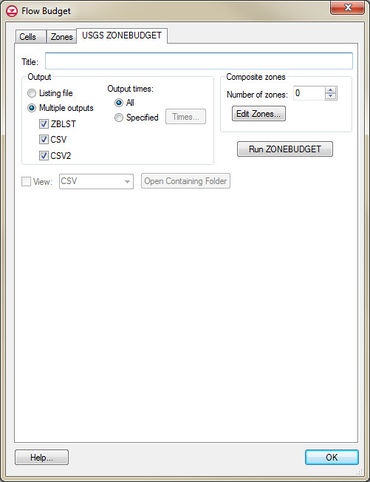