Projection refers to a map projection like UTM. In XMS software, projections are associated with the project and individual data objects.

Starting with SMS 11.1 and GMS 9.1, the XMS software works on the concept of a "Display Projection". This is the projection being worked in. Each geometric object loaded into the XMS package, such as a Scatterset, DEM, grid or mesh, also has an associated projection. These two projections may not be the same. If the two projections are compatible (i.e. it is a viable option to convert from one projection to the other), the XMS package will convert the data from the object projection to the display projection, just for display purposes. This is referred to as "Project on the fly". The data itself maintains the values associated with the object projection so when the XMS package saves a project, the data files are not modified.

Alternatively, data can be reprojected from one projection to another, actually changing the data values that will be saved as part of a project. This is done by right-clicking on the geometric object in the project explorer (data tree) and selecting the Reproject... command. The SMS package includes a feature to reproject all data from whatever projection the data is currently in to a single projection using the Reproject All... command in the Display menu. 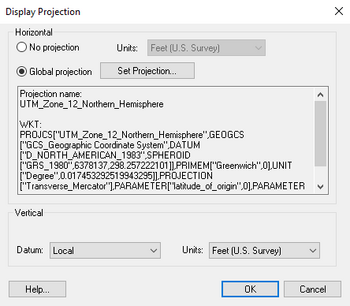 Example of the Display Projection dialog.

Objects without a specified projection are assumed by the XMS application to be referenced to the display projection.

When a data object is read into an XMS application, for which no data has yet been loaded and no projection has been specified, and the data object has its own projection, the display projection is reset to the object projection. This allows defining a working projection simply by loading data that uses that projection (and has a projection definition such as a *.prj file to define it.)

Many numerical models work in local or model space, and don't care how that system relates back to global coordinate systems (UTM, State Plane etc.). XMS software allows for this using a Display projection set to local or no projection option. This is standard practice when building a numerical model of a flume test. The units of the model are also specified as part of the projection. If the display projection is in this mode, no global projections are allowed on individual objects. 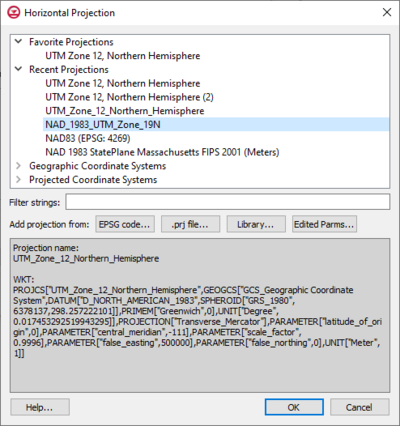 Reprojecting means to convert data from one coordinate system to another. For example, a 2D mesh representing the ground surface may have XYZ coordinates in a UTM system and they need to be converted to a State Plane system to be consistent with other data. Reprojecting results in the XYZ coordinates of the data changing, although conceptually the data is in the same place with respect to the Earth, just in a different projection or coordinate system.

There are four basic reprojection tasks:

Reproject on the Fly

If data does not line up due to incorrect or incomplete projection specification, specify different object projections to attempt to align the data correctly. Object projection is specified by right-clicking on the object in the project explorer.

Reprojecting everything can be done by selecting the Display | Reproject All... menu command. This will convert all the data loaded into the XMS application from the object projection(s) to a specified projection. This operation brings up a dialog which allows specifying the desired projection. The default value is the display projection currently specified for the project.

This command is done on a specific geometric object (grid, mesh, scatter set, ...) by right-clicking on the entity in the Project Explorer and selecting Reproject.... If the object does not have a specified projection, this command is not available. It can be accessed by selection the Projection... command for the object in the same right-click menu and defining a projection for the object.

Single Point Reprojection command is found in the Display menu and allows entering the XYZ coordinates for a point in one projection and see what the new coordinates would be if the point was reprojected to a different projection. It also allows creating a feature point at the new location. 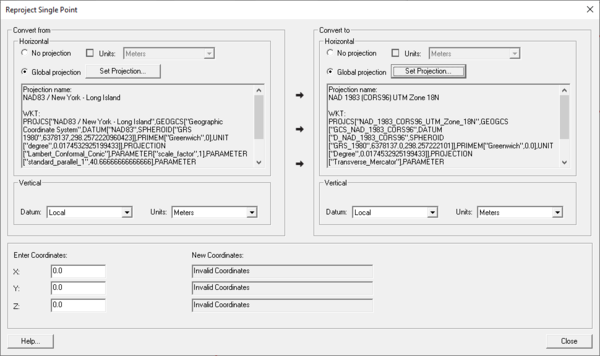