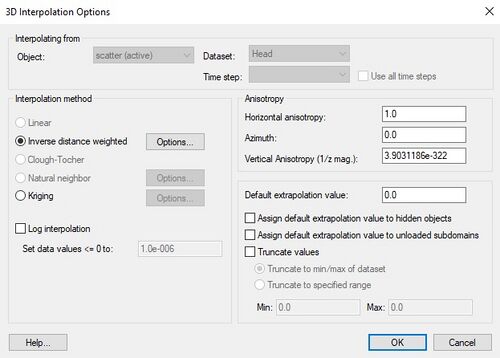 3D scatter point sets are used for interpolation to other data types such as grids and meshes. Interpolation is useful for such tasks as isosurface rendering or setting up input data for a model. Since no interpolation scheme is superior in all cases, several interpolation techniques are provided in GMS.

If the active dataset is transient then more interpolation options are available.

If the active dataset happens to be a transient dataset, two options are available:

The following methods are supported for 3D interpolation in GMS:

Sometimes the data associated with a scatter point set will have directional tendencies. The Azimuth and Horizontal Anisotropy allow taking into account these tendencies.

This option will assign the default extrapolation value to all cells that are hidden using the Hide command in the Display | Visibility menu option (see Display Menu).