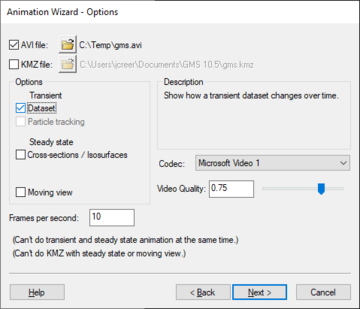 One of the most powerful visualization tools in GMS is animation. Animations can be created with transient or steady state data. Furthermore, the view angle and zoom factor can be changed during the animation. Animations are saved in the Windows (*.avi) format. AVI files can be played back externally to GMS using a variety of applications and can be inserted into multi-media documents and applications.

A new animation can be created by selecting the Animate command from the Display menu.

The animation tools are included with all editions of GMS, including the community version.

There are multiple options available when creating an animation:

All of the options except Moving view are either considered Transient or Steady state. GMS does not allow use of a Transient option and a Steady State option at the same time. Moving view, however, can be used by itself or in conjunction with any combination of the other options. 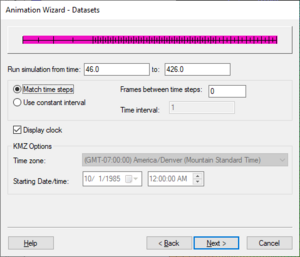 The Datasets page of the Animation Wizard dialog.

Transient dataset animation can be used with any object with a transient dataset. As each frame is generated, a set of values corresponding to the current time is loaded into memory and the image is redrawn using the current display options. Thus, if the contours are turned on in the Display Options, the contours will vary from frame to frame according to the changes in the dataset.

On the Datasets page of the dialog, the total number of frames generated in the animation can be defined in one of two ways:

Particle tracking can be animated to show how pathlines grow over time. Although it is considered a Transient option in the table above, this option can be used with a transient or a steady state solution. Only the forward tracking particle sets can be animated. 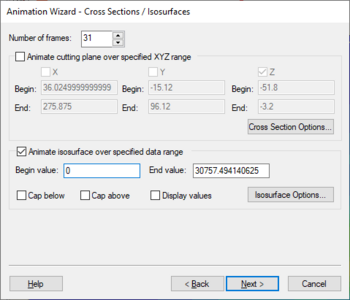 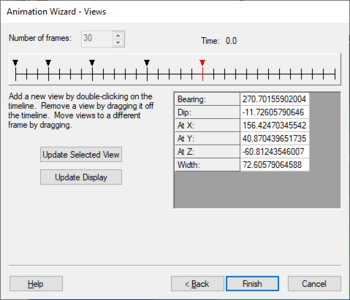 The Views page of the Animation Wizard dialog.

The Moving View option can be used by itself or in conjunction with any combination of the other options. This option can be used to change how to view the data as the animation proceeds. After selecting this option, set the desired distinct views using the tools on the Views page of the dialog. The timeline at the top of the Views page has a line for every frame. If there are many frames, each line may not be distinguishable from other lines.

Double-click on any one of the lines to create a new view. For a view that already exists, click on it to select it. A table appears with the data describing that view in the box on the right side of the dialog. The tools in the dialog allow for editing the view. This can be done in two ways:

Information on the meaning of Bearing and Dip is available on the GMS:Display Menu page under View Angle.

When the animation is generated, GMS will interpolate between the defined views to determine what the view should be at every frame.

Starting in GMS 6.5 choose which codec to use to create an AVI movie. GMS will search the computer for all compatible codecs and they will be available in the pull down menu.

Once a new animation has been generated, GMS launches the AVI player and plays the animation. The speed of playback can be adjusted using the Speed scroll bar. The maximum speed depends on the speed of the computer and the size of the image being animated. The smaller the image, the faster the maximum playback speed.