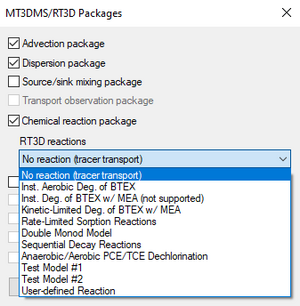 The reaction model used here simulates the instantaneous degradation of fuel hydrocarbons under aerobic conditions based on the following reaction (benzene basis):

Therefore, the mass ratio of benzene to oxygen, F, is 3.08 (i.e., 3.08g of oxygen to 1g of benzene). The instantaneous removal of either contaminant (H) or oxygen (O) is dictated by the following algorithm, where t refers to a particular time step:

Given this algorithm, either hydrocarbon or oxygen concentration in a given grid cell will be reduced to zero at each time step, depending on which component is stoichiometrically limiting in the prior time step.

The reaction that will be simulated is biodegradation of BTEX compounds via different aerobic/anaerobic pathways using multiple electron acceptors. Five different processes considered in this model are Aerobic Respiration (AR), Denitrification (DN), Iron (III) Reduction (IR), Sulfate Reduction (SR), and Methanogenesis (MG). All of these biochemical reactions are assumed to occur in the aqueous phase, mediated by the existing subsurface microbes, and are expected to happen in the following sequence:

The following reaction kinetic framework is used to model the degradation rate of hydrocarbon via different electron acceptor pathways:

Since the concentrations of Fe3+ and CO2 are not readily measurable under normal field conditions, these terms were replaced with the “assimilative capacity” for iron reduction and methanogenesis, defined as the following:

where [Fe2+max] and [CH4,max] are the maximum possible aquifer levels of these species that represent the aquifer’s maximum capacity for iron reduction and methanogenesis. Note: the concentration of CO2 used here is the CO2 evolved while the hydrocarbon is destroyed via methanogenesis, which may be thought of as the “Methanogenic Capacity” (MC) of the aquifer. Using these relations, iron (III) reduction and methanogenesis processes may be related back to measurable Fe2+ and CH4 concentration levels.

The total rate of hydrocarbon destruction, via all the above described processes, is the sum of each of the individual rates and is given as the following:

Rates of electron acceptor utilization are given as the corresponding rate of hydrocarbon destruction multiplied by the appropriate yield coefficient (Y):

As pointed out in Lu et al. [1], it is important to note that this model is based on several assumptions. The model should be used with caution only at sites where these assumptions are valid.

In summary, the key assumptions used in the model are: (1) the fuel chemical species benzene, toluene, ethylbenzene, and xylene are assumed to degrade at similar rates and, hence, are combined and modeled as a single electron donor species BTEX; (2) production of Fe2+ and methane are restricted at a node to a “maximum-observed level”; however, the model assumes that an infinite supply of electron acceptors will be available for iron-reduction and methanogenic reactions; (3) more complex processes are not considered; these include processes such as the rate-limited interaction of bioavailable, solid-phase Fe3+ and aqueous-phase Fe2+, interaction of oxygen and Fe2+, and/or variations in the spatial pattern of methanogenic activity and CO2 availability; (4) growth and decay of various microbial populations and their interactions with contaminants and aquifer solids are assumed to be negligible; and (5) all BTEX decay reactions are approximated as first-order reactions, and, hence, the model ignores the Monod limitation due to the electron donor (BTEX) availability. Fortunately, these assumptions are expected to be reasonable approximations for most field sites. However, there will always be some exceptions.

The fate and transport of an organic pollutant in subsurface environments is often highly dependent on its sorption characteristics. Under most natural groundwater flow conditions, the partitioning of contaminants between the solid and aqueous phases can be assumed to be at a local equilibrium. Thus, the more widely used retardation approach for modeling sorption may provide an adequate description for the overall transport. However, the equilibrium assumption may fail when external pumping and injection stresses are imposed on an aquifer (e.g. using a pump-treat system). This would lead to some well-known conditions such as the plume tailing effect (i.e., low contaminant levels always observed at the extraction well) and/or the rebounding effect (i.e., the aquifer seems to be clean but the aqueous concentrations start to increase immediately after stopping the treatment system). These conditions cannot be simulated using the standard linear retardation approach since they require a mass-transfer description for the sorption reactions.

When sorption is assumed to be rate limited, it is necessary to track contaminant concentrations in both mobile (groundwater) and immobile (soil) phases. Following Haggerty and Gorelick’s (1994) approach [2], the fate and transport of a sorbing solute at aqueous and soil phases can be predicted using the following transport equations:

It can be mathematically shown that the above model formulation relaxes to the retardation model when the value of x becomes high.[3]

These two differential equations are coded into the model #4 designated as the rate-limited sorption reaction module.

Methods for enhancing in situ bioremediation of subsurface soil and groundwater involve injection or infiltration of a carbon source (or electron donor), nutrients, and other electron acceptors to stimulate the growth of native microbes. In addition, bioengineered suspension cultures of contaminant degrading organisms may be also added to increase the amount of attached and suspended biomass in the subsurface. These two types of active remediation techniques can be used to bioremediate contaminated source zones or to establish a biobarrier to prevent plume migration and/or to enhance plume attenuation. The successful use of subsurface microbes for bioremediation requires an understanding of coupled flow, transport, and reaction processes that control bacterial growth and migration patterns. The Dual-Monod model, available in the RT3D code, can be used to develop such understanding by simulating the coupled reactive transport and microbial growth. The model is developed in a general format; therefore, the interaction between any electron donor and acceptor mediated by any type of microbial population can be simulated by varying appropriate kinetic constants. Advanced users can modify this basic formulation and couple it with other packages, such as the sorption package, to simulate more realistic bioremediation scenarios (any such modified reaction models can be easily implemented via the user-defined reaction option).

Assuming the linear-equilibrium model for modeling sorption, and the Dual-Monod model for modeling bacterial growth, the fate and transport equation for an electron donor (hydrocarbon, for example) in a multi-dimensional saturated porous media can be written as follows:

The model assumes that the degradation reactions occur only in the aqueous phase, which is usually a conservative assumption.

The fate and transport of the electron donor (oxygen, for example) can be modeled using this equation:

The fate and transport of bacteria in the aqueous phase can be described using this equation:

The growth of attached-phase bacteria can be described using an ordinary differential equation of the form:

The conceptual model used here for representing attached bacteria cells is similar to the macroscopic model described by Baveye and Valocchi (1989). [4] The model also assumes first-order kinetic expressions for representing bacterial attachment and detachment processes (Taylor and Jaffé, 1990; and Hornberger et al., 1992).[5] [6] Permeability and porosity changes caused by bacterial growth are ignored in this formulation. However, if required, macroscopic models for biomass-affected porous-media properties described by Clement et al. (1996) may be integrated within this modeling approach.[7] It should be noted that a lot of active research is currently underway to gain an increased understanding of bacteria transport in porous media because currently available bacterial transport models (including the model used here) are arguably approximate. Therefore, application of this model to real situations should be always supported by field- or laboratory-scale data.

The reactive-transport model discussed above was set up as a RT3D reaction package with three mobile species (to represent electron donor, electron acceptor, and aqueous bacteria) and one immobile species (to represent attached soil bacteria). After employing the reaction-operator splitting strategy, the reaction package for the problem reduces to the following:

These four equations are coded into the double-monod reaction module.

The following set of equations describes the reaction kinetics framework:

Kinetic Constants (to be manually entered):

The following constants (yields in mg/mg basis) are fixed internally:

With the linked subroutine option, the code for the new reaction subroutine is compiled and linked with the rest of the RT3D source code (or the RT3D library made for a specific computer platform). In other words, the RT3D executable must be recompiled each time the reaction package is modified.

Reaction module developers are considered advanced users of the RT3D code. The required background is as follows: