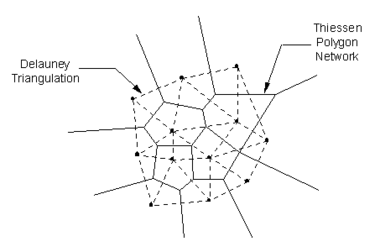 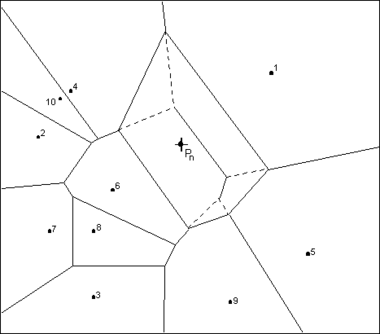 Only those points whose Thiessen polygons have been altered by the temporary insertion of Pn are included in the subset of points used to interpolate a value at Pn. In this case, only points 1, 4, 5, 6, & 9 are used. The local coordinate for each of these points with respect to Pn is defined as the area shared by the Thiessen polygon defined by point Pn and the Thiessen polygon defined by each point before point Pn is added. The greater the common area, the larger the resulting local coordinate, and the larger the influence or weight the point has on the interpolated value at Pn.

The local coordinate lm(n) varies between zero and unity and is directly used as the weight, wm(n), in the interpolation equation. If Pn is at precisely the same location as Pm, then the Thiessen polygon areas for Pn and Pm are identical and lm(n) has a value of unity. In general, the greater the relative distance Pm is from Pn, the smaller its influence on the final interpolated value.

As shown in the figure above, the Thiessen polygons for data points on the perimeter of the triangle network are open-ended polygons. Since such polygons have an infinite area, they cannot be used directly for natural neighbor interpolation. Thus, a special approach is used to facilitate extrapolation with the natural neighbor scheme. Prior to interpolation, the X and Y boundaries of the object being interpolated to (grid, mesh, etc.) are determined and a box is placed around the object whose boundaries exceed the limits of the object by approximately 10% (this value can be modified). Four temporary "pseudo points" are created at the four corners of the box. The inverse distance weighted interpolation scheme with gradient plane nodal functions is then used to estimate a data value at the pseudo-points. From that point on, the pseudo-points with the extrapolated values are included with the actual data points in the interpolation process. Consequently, all of the points being interpolated to are guaranteed to be within the convex hull of the data points. Once the interpolation is complete, the pseudo-points are discarded. 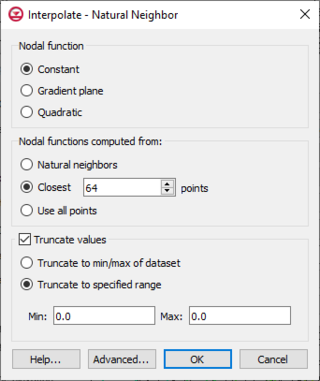 The options in the dialog are as follows: