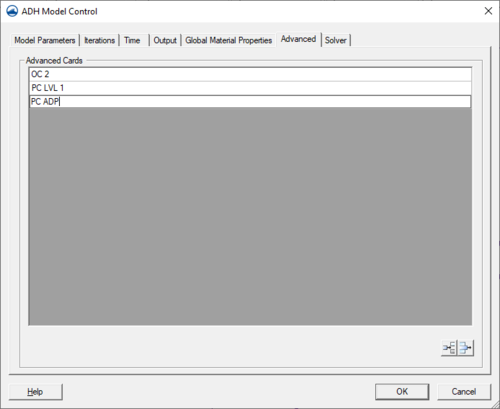 SMS includes support for many of the features in ADH, however, this list of features is a dynamic set. The user base of ADH includes a development team that is constantly experimenting with new options.

This window allows SMS to maintain the options that are not otherwise supported by the interface. For example, when SMS reads the BC file for an ADH simulation, and encounters a card that it does not recognize, that card is stored, verbatim, to a list of "Advanced Cards". That list is displayed in this window.

Enter cards in this dialog to experiment with other new features in the model. As those features are added to the list of supported features, they would automatically be moved to their own location in the model control the next time SMS reads the BC file.

Unsupported or advanced cards are written at the end of the BC file, just before the END card. This relies on the attribute of ADH that does not require any order dependence in the BC file.

Model options not available in the interface can be specified under the Advanced tab. Each row in the spreadsheet will be saved as a different line in the *.bc file. The cards can be inserted and deleted using the Insert Row