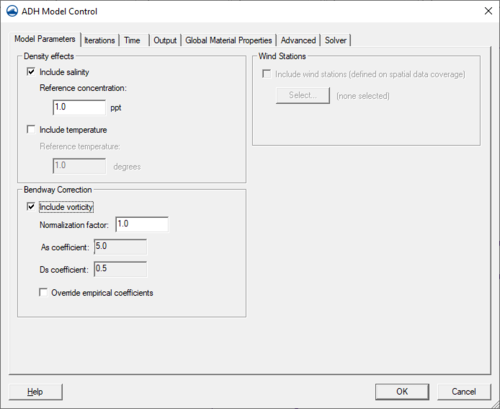 The Model Parameters tab of the ADH Model Control dialog

The model parameters window is divided into three sections:

Each of these sections are described below.

The ADH model includes the ability to simulate the effects of salinity and temperature on flow. This section includes two check boxes to activate these options.

The SW2 option in ADH simulates two-dimensional flow. However, some three dimensional effects can be approximated. This includes a method for correcting for the effects of vorticity around bends. Selecting the Include vorticity check box will cause SMS to add this card and activate this feature. It also adds the OP TRN card since vorticity is simulated in ADH as a transport constituent.

When the feature is active, it's necessary to specify three coefficients. These include the As and Ds empirical coefficients determined by integrating against measured values (defaults of 5.0 and 0.5) and a normalization factor.

SMS will write an XYC card for each wind station. This card defines the curve containing the wind data and the location of the station.