Command objects provide the ability to provide additional commands for TUFLOW simulations using the TUFLOW command file syntax. The SMS interface provides some guidance for using these commands and allows linking to objects created in SMS. Command objects can be used for:

TUFLOW command object syntax is described in the TUFLOW manual. Each line (except for blank/comment lines) has a command identifier. After the identifier most commands have are followed by a double equals “==” and a command value. In some cases, the command value may have multiple parts separated by blank spaces or “|.” A few commands don’t have any arguments and do not have a “==” at all.

The appendix of the TUFLOW manual contains a complete list of the commands that are available, the purpose of each command, and its syntax. The identifiers above in parentheses (*.tcf, *.ecf, *.tgc, *.tbc, and *.tef) are the abbreviations used by TUFLOW for file naming and also used to find the appropriate section of the appendix for a set of commands.

Command objects are created using right-click commands in the Project Explorer. After creating a TUFLOW simulation, a folder named “

Command Objects” in the TUFLOW root folder should appear. Create command objects by right-clicking on the “

. This approach can be repeated to create additional command objects of the same or different type. 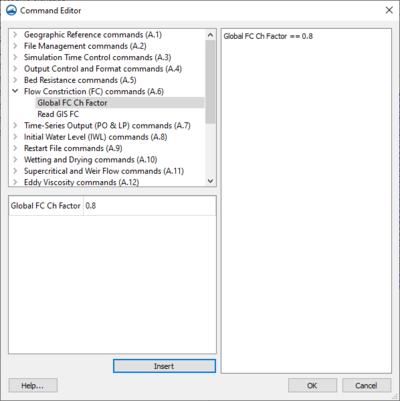 When command objects are first created, their contents are blank. Edit the contents of a command object by double-clicking on the object, or right-clicking and choosing Edit Commands. This will bring up the Command Editor dialog.

The Command Editor dialog has two main parts. One part consists only of a text editor. The text in this editor is what is stored with the command object and will be used with the TUFLOW model. The commands for the object may be typed directly into the editor. Comments may be added and must start with the exclamation mark (!).

Once the command creation controls have been specified as desired, the command is inserted into the command text using the insert button. Once this has been done, editing of the command must be done in the editor. It is not possible to edit commands already created using the create command controls. Delete an existing command and insert another to use the controls to setup the command text.

TUFLOW command objects can define scenarios in order to setup multiple models that have shared data without the need for separate simulation objects. Anything not specified for one or more scenarios is used in all scenarios for the simulation. Scenarios could be used to model different geometries by including z-lines or tins for specific scenarios but not others.

Scenarios can only be defined using command objects. Scenarios are defined by using the following commands:

A scenario block must start with “If Scenario” and end with “End If.” The other commands are optional.