The simplest form of inverse distance weighted interpolation is sometimes called "Shepard's method" (Shepard 1968). The equation used is as follows:

where p is an arbitrary positive real number called the power parameter (typically,p=2) and hi is the distance from the scatter point to the interpolation point or

The effect of the weight function is that the surface interpolates each scatter point and is influenced most strongly between scatter points by the points closest to the point being interpolated. 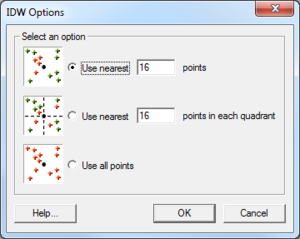 If the Use subset of points option is chosen, the Subsets button can be used to bring up the Subset Definition dialog. Two options are available for defining which points are included in the subset. In one case, only the nearest N points are used. In the other case, only the nearest N points in each quadrant are used as shown below. This approach may give better results if the scatter points tend to be clustered. 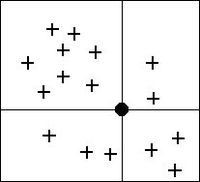 If a subset of the scatter point set is being used for interpolation, a scheme must be used to find the nearest N points. Two methods for finding a subset are provided in the Subset Definition dialog: the global method and the local method.

When computing the interpolation weights, three options are available for determining which points are included in the subset of points used to compute the weights and perform the interpolation: subset, all points, and enclosing triangle.

If the Use all points option is chosen, a weight is computed for each point and all points are used in the interpolation. 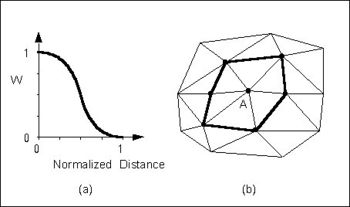 (a) S-shaped weight function and (b) Delauney point group for point A.

Barycentric coordinates for a point in a triangle.

Solving the above equations for bi, bj, and bk yields:

Using the weight functions defined above, the interpolating surface at points inside a triangle is computed as:

where wi, wj, and wk are the weight functions and Qi, Qj, and Qk are the nodal functions for the three vertices of the triangle. 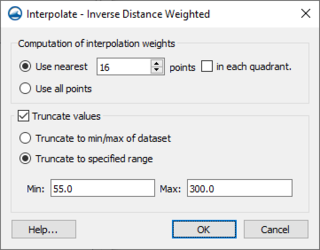 The Interpolate – Inverse Distance Weighted dialog is reached from the Interpolation Options dialog. It contains the following options: