Infragravity (IG) waves are surface gravity waves with frequencies lower than the wind waves (hence the reference to them as long waves). IG waves consist, among others, of long-period oceanic waves generated along continental coastlines by nonlinear wave interactions of storm-forced shoreward-propagating ocean swells. They differ from normal oceanic gravity waves which are created by wind acting on the surface of the sea.

While normal wind waves typically have periods in the order of 20 seconds (or less), these waves can interact with coastlines which filter out the energy and covert some of the energy to subharmonic frequencies (ranging from 50 - 350 seconds). These are the IG waves. IG waves could also refer to phenomena such as tides and oceanic Rossby waves.

When modeling harbors, it is possible energy in the IG range could result in resonance in the harbor. Therefore, it may be useful to simulate these terms in a CGWAVE analysis of a harbor. 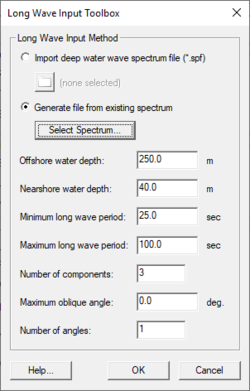 To define wave conditions consistent with infra-gravity waves, the interface in SMS includes the Infra-Gravity Wave-input Toolbox (IGWT). This tool utilizes a one dimensional Boussinesq model to compute wave conditions for input to CGWAVE.

The IGWT requests for the following inputs:

The IGWT is actually setting up and running a one dimensional Boussinesq model as well as a pair of utilities to compute wave components to be applied on the CGWAVE mesh. Since this process is not always successful, it can be useful for the user to understand the process and in some cases, work through the process manually. As the tool is exercised and modified (feedback is welcome), the need for manual operation should be reduced, but understanding the process is still valuable. The three executables used in this process are distributed with SMS and can be found in the models area of the installation in the BOUSS2D folder. Each can be run in a DOS prompt in interactive mode if needed.

The IGWT uses the BOUSS-1D model executable bouss1d.exe which is a one dimensional version of the Boussinesq equations. SMS creates a one dimensional profile starting at the specified deep water condition, maintaining that depth for five wavelengths and then transitioning up a gentle slope (1:50) to a depth of zero (0.0). The IGWT uses a grid spacing of 1/20 of the wavelength computed from the provided frequency spectrum.

The one dimensional run creates a number of output files at the specified near shore depth. These including significant wave height, mean water level, runup and a time series of water surface. The IGWT will use the water surface file (*_ts_eta.001) as input to the spectral analysis utility in the next step.

The IGWT uses the utility spec_anal.exe to process the water surface time series at the near shore depth and create a spectrum. This analysis can also be run manually at a DOS prompt after the one dimensional Boussinesq run generates the time series file. The utility will prompt the user for the name of an output file (qspec.001 by default). This output file in used as input in the next utility to generate wave components.

The IGWT uses the utility export_v1.exe to process the frequency spectrum at the near shore location and extract wave components at regular freqency spacing from the minimum to the maximum defined range. The utility creates a text file (out.txt) that lists these components.

Once the three processes have been run, the IGWT reads the out.txt file and distributes the wave components over the specified directions (centered around shore normal).

It is possible that zero energy components may be added. The user should verify the generated components.

The IGWT utilizes a one-dimensional version of the BOUSS-2D model to transform wave spectrum from the "deep-water" limit of the Boussinesq model (H < L/2). A constant 1:50 slope is assumed between the offshore and nearshore water depths. If complex offshore topography exists, use BOUSS-2D to bring the waves to the nearshore.