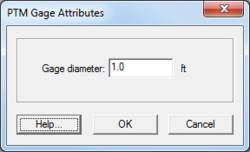 The gages can be thought of as open traps which monitor the number parcels and material that enter the specified region during the simulation.

When using the Particle Module Compute Grid Datasets command, choose to compute datasets associated with a grid or with a PTM Gage coverage. When the gage coverage option is selected, SMS computes output data associated with each point and/or polygon. This data consists of sets of xy series curves organized by solution and dataset name. Each curve represents a quantity related to the specific gage. These quantities include count, accumulation, concentrations, rate of exposure and all of the options supported by the Compute Dataset command including the options to bin concentration, exposure and dosage in the "Z" direction (creating 3D data). The output data is visualized using a PTM Gage plot type in the plot wizard for 2D plots.

The polygons and points in the virtual gage coverage are created with discrete color attributes. Each point has a radius attribute that represents the area over which the computations will apply.

In addition to creating virtual point and polygon gages, the PTM Gage Coverage can also be used to view data output by PTM in its Trap Output file. This functionality does not include the concentration, dosage and exposure options, but it does allow visualizing data related to closed traps.