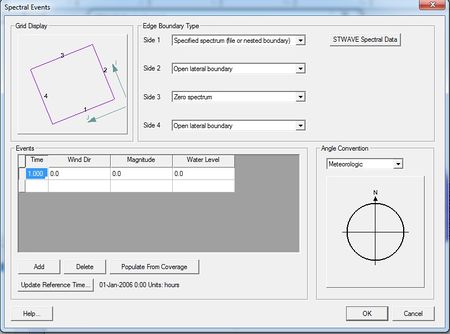 This graphic shows the orientation of the grid and labels the sides of the grids which is used in other controls within the dialog.

The type of boundary condition applied to each edge of the STWAVE grid is shown and in some cases edited in this section of the dialog.

The types of boundary conditions include:

For half-plane models, the boundary condition types are fixed and energy travels in the positive I direction of the grid. In this case, specify which spectra that will be introduced at side 1. Sides 2 and 4 will be treated as 1D transformed spectra.

This spreadsheet defines the time step or cases that will be used and the input boundary conditions for each.

The first column is the time offset value. This number represents how much later the time is than the specified reference time. Hence, if 5 is entered for the time offset, and the time units is hours, then it is the case of 5 hours later. When nesting is used, the case ids, and the number of cases, will be determined by the parent simulation.

In addition to the external condition, the engine can simulate distributed forces over the domain including wind, surge and currents. The currents applied to a simulation are specified in the Model Control dialog. Wind and surge values are specified in the spread sheet in columns 2 through 4.

The spectra to be used will be matched up or interpolated with the model timesteps. The button Populate From Coverage can be used to generate events for each time found in the spectral coverage(s) that have been assigned to the model.

The number and use of the remaining columns in the spreadsheet will depend upon the options used for the STWAVE simulation. For example, if a constant value is used for wind and/or surge columns will appear that represent the wind direction, magnitude and/or tidal elevation as applicable.

The reference time controls allow setting a reference time and the units to be used when defining the time for each case. Clicking on the Update Reference Time button will bring up a Time Settings dialog. In this dialog the "Reference Time" and "Time units" can be set.