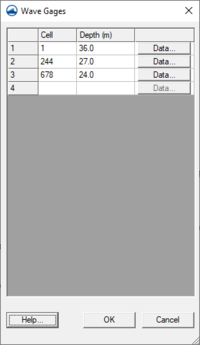 The wave gage is created either as an Attribute on a feature point in the GenCade coverage, which will be mapped to a specific cell in the grid, or it may be specified directly on the grid. For each wave gage, specify a depth and wave events. Each wave event has a date and time, a H0, a period, and a direction. The model computes the wave conditions for each cell in the grid by interpolating the data from the neighboring wave gages.

Wave gages specified in a GenCade coverage will be displayed at the feature point in the coverage, and will appear when the 1D grid (not grid frame) is created on the associated cell in the grid.

If attributes of a wave gage are changed on a feature point, these changes do not impact the simulation unless the attributes are mapped to the grid again (Map → 1D grid). Wave gages can be edited using the Edit Wave Data.. option from the GenCade menu after the grid is created and still take effect.

Wave events can be edited by clicking on the Data... button when editing the wave gage. This can be done for either a gage on a 1D grid, or a gage at a feature point. 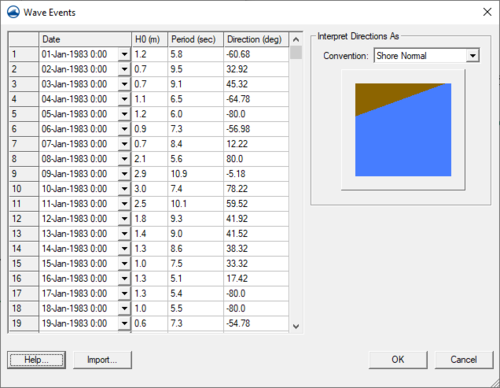 Example of a Wave Event dialog.

Wave conditions, including significant wave height, peak period, and direction, drive the transport forces that impact coastal morphology. GenCade requires wave data for at least one location in the domain, and supports options for specifying wave data at multiple locations in the domain. Each wave gage includes:

Issuing the command to edit wave data invokes the Wave Gages dialog. This dialog lists the gauge cell IDs and the depths. It also includes a button for each gage to view/edit the wave data at that gage.

Clicking on the Data ... button for any of the gages brings up the Wave Events dialog. This dialog displays the time, height, period and direction (in shore normal coordinates) for the gage. The data is in a spread sheet, so it may be copied and pasted from other spread sheet data. There is also an Import button that can be used bring up the Import Wizard to bring in wave events data stored in a text file. The data is saved and passed to the model in the wave file.

Used with CGWAVE, the paramters must first be defined in the CGWAVE Model Control dialog. 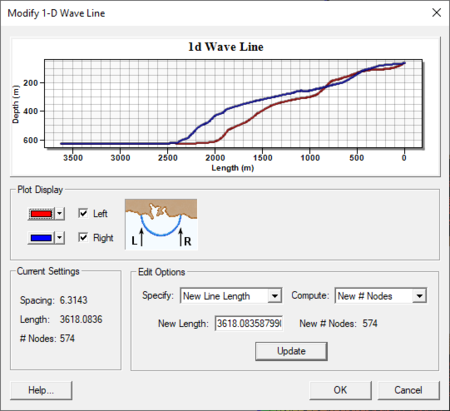