ADH stands for ADaptive Hydrology/Hydraulics and is a numerical model being developed by the US Army Corps of Engineers (USACE). An interface to ADH

is being added to GMS. ADH is currently only available to individuals in USACE.

GMS can draw symbols at mesh nodes, faces and edges to show where boundary conditions and node, face and edge sets are defined.

The ADH Analysis Options dialog is used to specify general and global model variables. For more information on each variable refer to the ADH file format cards supported in GMS. 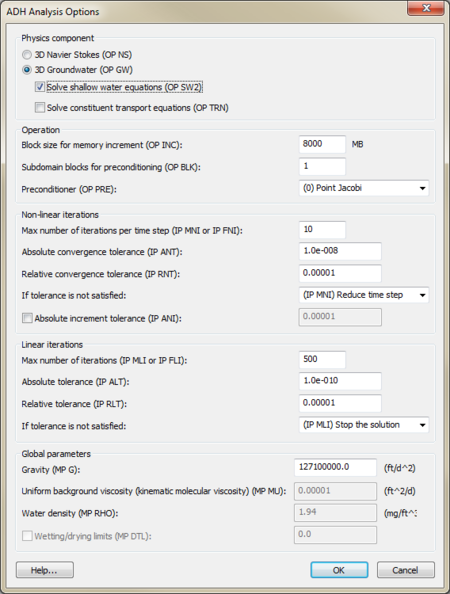 The ADH Output Control dialog shows options for ADH output. The times at which ADH will generate output are listed in the spreadsheet. Times can be added or removed or pasted from another application. Times can also be added using the options under Add times. 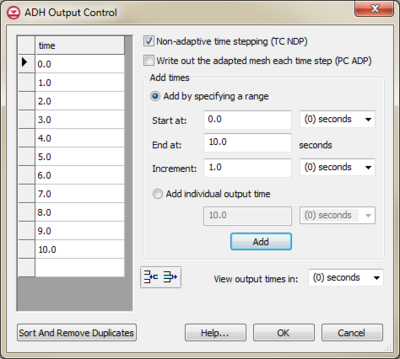 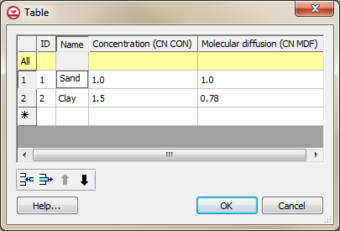 "Constituents" are analogous to MT3DMS "species" and represent mass that moves through water when modeling transport. Constituents will be ignored by ADH (but still saved to the BC file) unless the "Solve constituent transport equation (OP TRN)" option is turned on in the Analysis Options dialog. GMS allows constituents to be named for convenience but ADH ignores this name.

Two variables are defined per constituent:

ADH has two variables that are defined per material and per constituent:

ADH uses node, face and edge sets to define locations on the 3D mesh where boundary conditions are located. These sets are created and deleted separately from the boundary conditions, which makes for great flexibility. GMS associates names with the sets for convenience and automatically numbers the sets when saving the ADH input files.

A node set is simply that – a set of nodes. It is created by selecting boundary nodes using the Select Boundary Nodes

An edge set is a collection of edges. An edge is defined as the line connecting two nodes on an element face. The edge is therefore described as a pair of nodes. Edge sets are created by defining a node string using the Select Node Strings

Existing sets can be viewed and edited using the ADH | View Sets menu command. This brings up the View Sets dialog which lists the existing sets. Selecting sets in the list will cause the corresponding items on the 3D mesh to be selected and highlighted. The name of the set can be edited, but adding or removing items from the set is not allowed. If this type of editing is desired, you must delete the set and recreate it with the correct items.