Once a grid has been created, the next step in converting a MODFLOW conceptual model to a numerical model is to inactivate the cells which lie outside the boundary of the conceptual model. This is accomplished by selecting the Activate Cells in Coverage command in the Feature Objects menu. When this command is selected, GMS utilizes the polygons in the coverage that is designated as the model boundary to determine which cells should be active and which cells should be inactive. Each cell is compared with the polygons in the coverage and if the cell does not lie within the interior of any of the polygons, the cell is determined to be outside the domain of the model and is inactivated. Cells inside the model domain are made active. 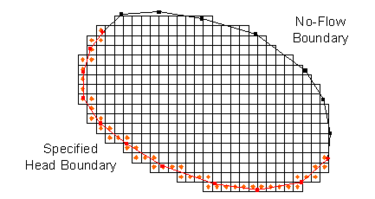 Sample application of the Activate Cells in Coverage command

If an arc on the boundary of the model domain has a head dependent attribute assigned to it, a different test is used. Any cell that intersects the arc is designated as active, regardless of what percentage of the cell is inside the model domain. As a result, the centers of the cells along the boundary approximately coincide with the source/sink arc. This is appropriate in this case since the stresses are applied in MODFLOW at the cell centers.