In order to create a 3D mesh in GMS, there must be a set of 3D Mesh nodes. Elements can be created by using one of the Create Element tools and then selecting the mesh nodes to create elements. Duplicate points can be removed by selecting Find Duplicates command from the Mesh menu. If a node is found that is within a user specified tolerance of another node, the node is either selected or deleted.

3D Meshes can be created 2 different ways in GMS: converting a different GMS data type to a 3D mesh and using an automatic meshing technique.

3D grids and 3D scatter points can be converted to a 3D mesh. This is accomplished by using the following commands:

The Scatter Points → Mesh Nodes command is used to convert each of the scatter points to a 3D mesh node. The nodes can then be used to generate a mesh using the Tessellate command in the Mesh menu in the 3D Mesh module.

3D finite element meshes are not always constructed within the 3D Mesh module. The following methods are available for the construction of 3D Meshes: 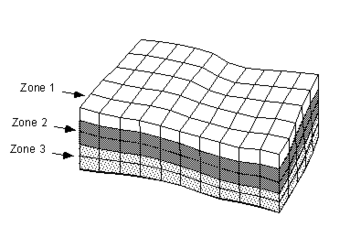 3D meshes are often constructed using a combination of tools in the TIN module and the 2D Mesh module. Portions of the mesh corresponding to "zones" or stratigraphic units are constructed one at a time as shown below. Each of these zones is bounded above and below by a surface and consists of one or more layers of 3D elements.

Before constructing a zone of elements, a 2D mesh must be created or imported using the 2D Mesh Module. A pair of TINs must also be created which represent the top and the bottom of the zone. These TINs are typically constructed from borehole data or from scatter points. The zone is then created by selecting the two TINs and selecting the Fill Between TINs → 3D Mesh command in the TINs menu. At this point, the user is prompted to enter the number of layers of elements to be created between the TINs and the material that will be associated with the elements in the zone. Each of the elements in the 2D mesh is then "projected" through the two TINs to create a vertical column of 3D elements as shown below. For example, if N layers are specified, N 3D wedge elements are created from each of the triangular elements in the 2D mesh, and N 3D hexahedral elements are created from each of the quadrilateral elements in the 2D mesh. The Z coordinates of the nodes created for the 3D elements are distributed uniformly between the top and the bottom TINs. 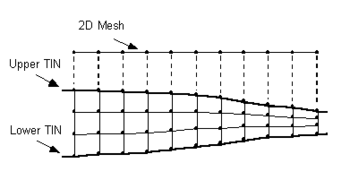 This process is repeated for each of the zones in the mesh. In order for the nodes at the bottom of one zone to match the nodes at the top of another zone, the same TIN should be used at the bottom of the upper zone and at the top of the lower zone. If the vertices of the TIN are edited in any way after one layer is generated but before an adjacent layer is generated, a gap may be introduced between the two zones of 3D elements. 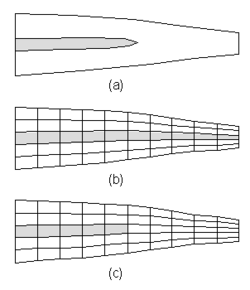 The advantage of this construction procedure for 3D meshes is that it is simple and it is fast. The disadvantage of the procedure is that truncations or pinchout zones in the stratigraphy are not directly modeled. However, such features can be simulated by selecting elements and changing the material type associated with the elements once a zone of elements has been created. For example, suppose an aquifer contains a clay lens that extends partially into the aquifer as shown in part a of the figure below. A zone of elements could be created for the clay layer which extends over the entire XY range of the model (part b). The elements in this set of clay elements that are not in the region actually occupied by the clay layer could be selected and assigned the material type of the aquifer (part c). This can also be accomplished with a Solid Model and the Classify Elements command.

Unlike the Solids → MODFLOW Boundary Matching option, it is not necessary to create a 3D mesh before selecting the Solids → Layered Mesh command. The 3D mesh is automatically generated. Each element in the 2D projection mesh is extruded into a vertical column of cells and the solids are used to assign the elevations to the nodes. The material ids are assigned to the 3D elements by finding the solid that encompasses the centroid of each 3D element assigning the material id of that solid to the element.

A mesh can be automatically constructed from a set of 3D nodes with the Tessellate command in the Mesh menu of the 3D Mesh module. This command performs the three-dimensional equivalent of the Delauney triangulation process. The Tesselation algorithm assumes that each of the vertices being tesselated is unique in xyz, i.e., no two points have the same xyz location. The result is a mesh composed entirely of tetrahedra. The region that is meshed corresponds to the convex hull of the nodes.