Initial conditions are defined using the Initial Conditions dialog. The available options are as follows: 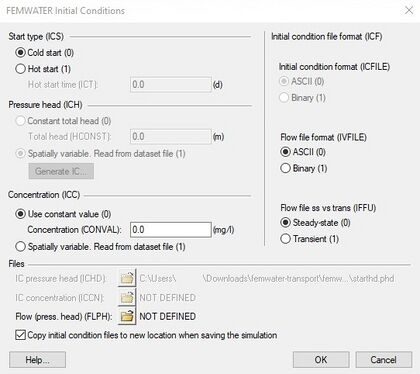 Two options are available for designating a pressure head cold start initial condition. One option is to enter a constant value into the field labeled Total head. This essentially defines an initial condition corresponding to a flat water table. FEMWATER reads this value and internally generates an array of pressure heads by subtracting the nodal elevations from the given total head value.

The Read from dataset file option can be used to designate that the pressure head varies spatially and that the values will be read from a dataset file. If this option is selected, the name of the file must be entered at the bottom of the Initial Conditions dialog in the field titled IC pressure head. The dataset file is a standard GMS dataset file in either the ASCII or binary format. The dataset file can be generated using the interpolation options and then saved using the Export Dataset command accessed by right-clicking on the dataset file. However, a simpler approach to generating a well-posed initial condition is to use the Generate I.C. button. This button brings up the Generate Pressure Head Initial Condition dialog.

The first two items in the Generate Pressure Head Initial Condition dialog are used to select a 2D scatter point set and dataset. The scatter point set defines a set of elevations corresponding to a best estimate of the final computed water table elevation. A minimum pressure head may also be entered. When the OK button is selected, the elevations in the scatter point set are interpolated to the nodes of the 3D mesh. This defines a total head initial condition. The pressure head initial condition is computed by subtracting the node elevations from the total heads. The user is then prompted for a file name and the pressure head dataset is saved to a GMS dataset file and the path to the file is automatically written to the IC pressure head field at the bottom of the Initial Conditions dialog.

Hot starts are used to begin a new simulation starting at a given time step of a solution computed from a previous transient simulation. If the hot start option is chosen, FEMWATER reads the specified hot start file and finds the time step corresponding to the specified time. The solution then begins using the dataset at that time as the initial condition.