Several model parameters must be defined for a given FEMWATER simulation. In many cases the default values suffice. The following is a list of the required parameters: 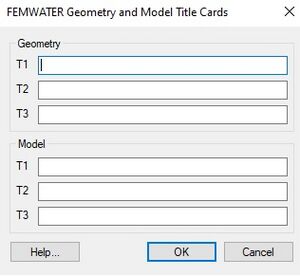 The FEMWATER Run Options dialog is used to set the simulation run parameters and to enter a set of general analysis options.

The FEMWATER Iteration Parameters dialog is used to enter the iteration parameters for each simulation type (flow only, transport only, coupled flow and transport). 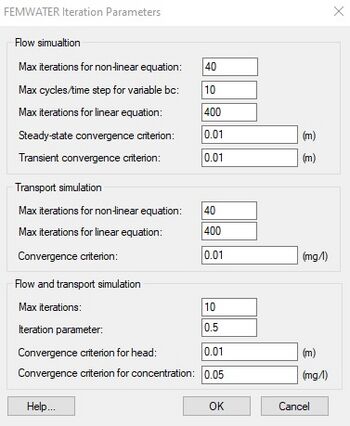 The FEMWATER Particle Tracking dialog is used to edit parameters relating to how the particle tracking is carried out by FEMWATER during the transport phase.

FEMWATER particle tracking refers to the algorithm used by FEMWATER to do advective transport. In GMS versions 6.5 and earlier there was another type of particle tracking available which was similar to MODPATH but for FEMWATER flow solutions. That functionality is documented on the FEMWATER Particle Sets page.

Page 32 of the FEMWATER manual describes the particle tracking used in advective transport. However the algorithm described is not actually used in the code. Instead a simpler adaptive time stepping algorithm is used. The parameter NXW is used as a "time step divisor" – backtracking begins by assuming a sub-time step, and every time backtracking fails, this sub-time step is divided by 2. NXW is used as an "Initial number of steps per time step" and the other parameters on the PT1 card are ignored.

The FEMWATER Time Control dialog is used to enter the data used by FEMWATER to compute the computational time intervals. It is also used to define the reference time. The options in the dialog are as follows:

The Variable time step option permits variable intervals between time steps. Selecting the Variable Times button brings up the XY Series Editor. The XY Series Editor has one column for entering times and another for entering time steps. In the time column, the absolute time for a computational time step should be entered. The time step corresponding to each time represents the interval to be used from one specified time to the next.

A simple example of times and time steps defined in the XY Series Editor and the resulting computational time steps to be used by FEMWATER is shown below. In this case the maximum simulation time is equal to 48.0. 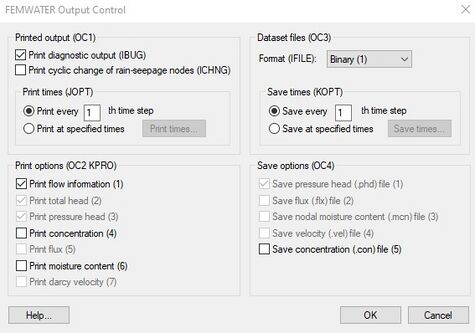 The FEMWATER Output Control dialog is used to enter parameters defining what type of output will be printed or saved from FEMWATER.

The Edit Values button brings up the FEMWATER Fluid Coefficients dialog. This button is undimmed when transport is being analyzed as part of the simulation. 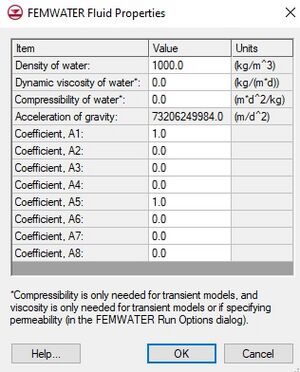 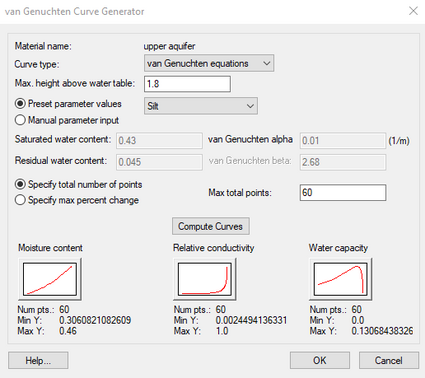 In most cases, the simplest way to generate a set of pressure head curves for the unsaturated zone is to use the Curve Generator. The Generate Unsat Curves button brings up the Curve Generator dialog. This dialog is used to automatically generate a set of unsaturated zone curves using the van Genuchten equations described in the FEMWATER Reference Manual. The items in the top of the dialog are used to select the curve type ('linear front' or 'van Genuchten equation') and the max height of capillary rise above the water table. Two methods are available for entering the Van Genuchten parameters: (1) selecting the Manual parameter input option and enter the values directly, or (2) selecting the Preset parameter values option and choose from a list of pre-defined soil types.

Once the parameters are defined the Compute Curves button can be used to generate a set of curves. The curves are displayed in the bottom of the dialog. New values can be entered and the process can be repeated until a satisfactory result is obtained. When the OK button is selected, the active curves are assigned to the current material.

Each of the unsaturated zone curves is a piece-wise linear curve defined by a sequence of points. The number of points in each curve is either specified by the user or determined automatically by specifying a Max percent change. If the max percent change option is used, a new point is added to the curve each time the parameter changes by the Max percent value.

Note that the effective porosity for each material is defined from the pressure head vs. moisture content curve. The value at p = 0 is taken from the curve and is written to the model file as part of the MP2 card.