The Grid Overlay option is one of the three basic options for the Solids → MODFLOW command. This option is very similar to the Grid Overlay option. One of the problems with the Grid Overlay option is that if there is a relatively thin layer in the solids and the layer does not happen to encompass any cell centers or it encompasses few cell centers, the layer will be under-represented in the MODFLOW grid. This becomes particularly important if the layer is meant to represent a low permeability layer. For such cases, the Grid Overlay with Keq option may give superior results. The Grid Overlay with Keq method is identical to the Grid Overlay method in terms of how the elevations of the grid cells are defined. The two methods differ in how the material properties are assigned. Rather than simply assigning materials based on which solid encompasses the cell centers, the Keq method attempts to compute a custom Kh and Kv value for each cell. When assigning the material properties to a cell, GMS computes the length of each solid in the cell (from a vertical line at the cell center that intersects the solids) and computes an equivalent Kh, Kv, and storage coefficient for the cell that takes each of the solids in the cell into account. Thus, the effect of a thin seam in a cell would be included in the Kh and Kv values for the cell.

The equivalent Kh is computed as follows:

where Khi is the Kh of a solid and Mi is the length of the same solid intersected at the cell center.

The equivalent Kv is computed as follows:

where Kvi is the Kv of a solid and Mi is the length of the same solid intersected at the cell center.

A horizontal cross-section through a sample grid defined via the Grid Overlay with Keq method is shown below. The colors represent the resulting Kh values. Note how the K values transition at the boundaries of the solids. 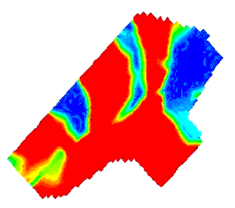 Caution should be taken when using the Grid Overlay with Keq method when performing automated parameter estimation. The "key value" approach to defining parameter zones for PEST requires that the values assigned to the zones be unique within each zone. With the Boundary Matching and Grid Overlay methods, the key values could be assigned to the solids and the values would be properly inherited by the grid cells. With the Grid Overlay with Keq method, the parameter values are "blurred" at the edges of the solids and the key values assigned by the user to the solids would be lost.