One of the three basic options associated with the Solids → MODFLOW command is the Boundary Matching option. The goal of the boundary matching algorithm is to compute a set of elevation arrays that honor the boundaries between the stratigraphic units as closely as possible. 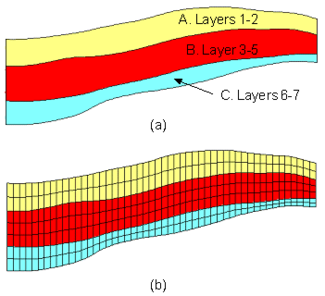 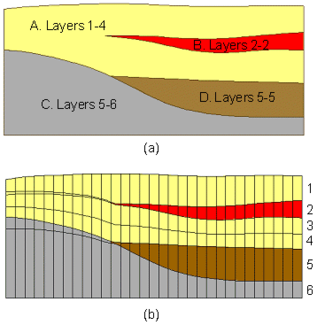 When assigning layer ranges to solids, care must be taken to define associations that are topologically sound. For example, since solid B in the figure above (a) is enclosed by solid A, solid B could not be assigned a layer range that is outside the layer range of solid A.

The final step is to select the Solids → MODFLOW command in the Solids menu. The layer elevations and material properties for the 3D grid will then be automatically assigned from the solids as shown below. 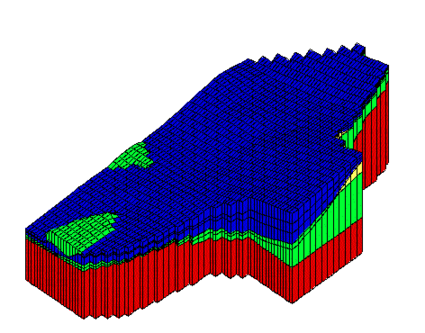 Grid after using the Solids→MODFLOW command

The following images represent cross sections at selected locations of the grid shown above. Notice that the grid elevations precisely match the stratigraphic boundaries defined by the solids while maintaining the continuous layers required by MODFLOW.

When the Solids → MODFLOW command is executed with the Boundary Matching option, it is common to have seams that occupy only a portion of a layer as shown in the above cross sections. The top and bottom elevations for cells adjacent to these seams must be adjusted by GMS using a "smoothing" process to ensure that there are not drastic cell size differences in the horizontal direction from one cell to the next. The smoothing is accomplished by iteratively changing the elevation of selected cells until the cell elevations change less than the Smoothing Tolerance specified in the Solids → MODFLOW Options dialog.

This option enables avoiding extremely thin layers at edges of pinchouts and represents the minimum thickness of grid cells created from the solids. Solids with thickness less than this amount are ignored and the surrounding material is used instead. This property is assigned in the solids Properties dialog. The figure below demonstrates the application of this property.