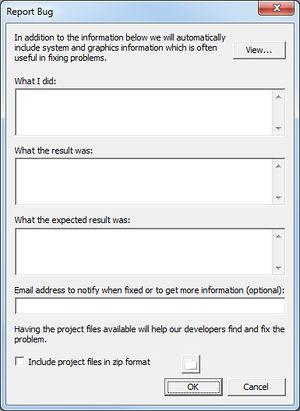 Example of the Report Bug dialog.

Some bugs in GMS are reported automatically to Aquaveo. This is done through bug trap software included in GMS. Automatic bug reports typically happen whenever GMS crashes.

Bugs can also be reported by users. It is advisable to first check Bugfixes GMS and the Aquaveo's Support Forums to see if the bug has already been reported. To report a new bug, go to the Help menu and select the Report Bug command. Activating this command will bring up the Report Bug dialog.

When reporting a bug, complete as many of the sections of the Report Bug dialog as possible. The more information the developers have the more likely the situation can be resolved in a timely manner.

GMS will deliver a text file that gives the configuration of GMS on the computer where the bug was reported. Clicking on the View button will bring up this text file which shows what information is being sent.

Write in this section a brief description of the actions that were being done when the bug occurred.

In this section, briefly explain the evidence of the bug in GMS.

Provide an email address so that Aquaveo can follow up on the reported bug. Emails in bug reports are kept private and are not sold or used in marketing.

It can be helpful to include project files of the project being worked on when the bug occurred. This will help determine if the bug is related to GMS or if it is a problem with the project files. Include all files in a single ZIP file. Use the browser button to attach the ZIP file to the bug report.

After completing this dialog, pressing OK will send the information to Aquaveo, LLC. An internet connection must be available and active for this information to be received.

After Submitting a Bug

In some cases, a bug cannot be resolved by Aquaveo, this is particularly true in cases where the bug has been caused by user error or if the bug is caused by third-party software used by GMS.

Not all users will be contacted once a bug is resolved. It is recommended to contact Aquaveo's technical support if there are further concerns.