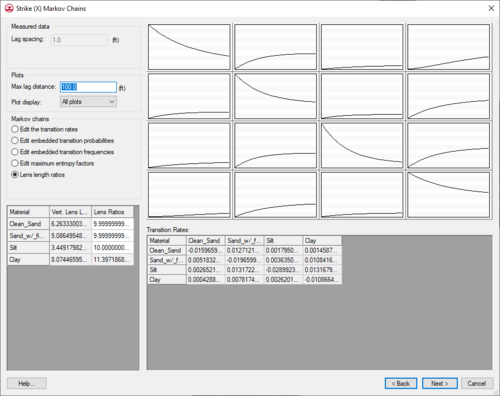 There are three minor differences between this dialog and the vertical dialog. The first difference is in the Markov Chains section. The option, Lens width ratios, replaces the Fit curves to a discrete lag option. The Fit curves to a discrete lag option is not applicable because horizontal measured transition probability curves do not exist due to lack of data in the horizontal direction. The Lens width ratios option is the default option and should be used in most cases. This option allows applying the transition data entered in the vertical direction to the horizontal direction. The proportion data are directly inherited from the vertical data.

The strategy for averaging the vertical transition rates to come up with the lateral rates is given in the three steps below.

The Dip (Y) Markov Chain dialog has an identical appearance and functionality as the Strike (X) Markov Chains dialog.