A dialog assists in defining the vertical Markov chains. This dialog is composed of three main sections:

All three sections enable developing a 1-D Markov chain in the vertical direction. 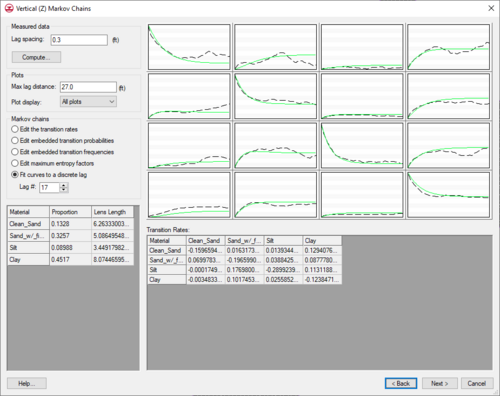 The plot section includes the array of curves, the Lag spacing edit field, the Compute button, and the Max lag distance for plots edit field. The number of plots in the array produced correlates to the number of materials used in the simulation. If N materials are used, an N by N array of plots will illustrate the transition probabilities for each material with respect to every other material. Every plot is labeled with a name and units and can be maximized with a command in the menu produced by right-clicking on the curve in question. The curves are automatically regenerated anytime a change is made in the other sections of the dialog. 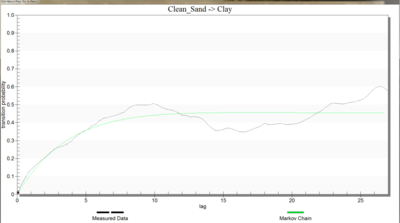 where x is a spatial location, h is the lag (separation vector), and j,k denote materials. The lag is defined by the Lag spacing item in the upper left corner of the Vertical (Z) Markov Chains dialog. The curve shown with the solid line is called a “Markov Chain”. The Markov Chains are used to formulate the equations used by T-PROGS to generate the multiple material sets during the simulation stage. The objective of this stage of the analysis is to fit the Markov Chain curves as accurately as possible to the measured transition probability curves. This process is similar to fitting a model variogram to an experimental variogram in a kriging exercise. The transition rates are adjusted to ensure a good fit between the Markov Chain model and the observed transition probability data.

where Φ denotes a lag in the direction hΦ, and RΦ denotes a transition rate matrix

with entries rjk,Φ representing the rate of change from category j to category k (conditional to the presence of j) per unit length in the direction Φ. The transition rates are adjusted to ensure a good fit between the Markov Chain model and the observed transition probability data.

It should be noted that the self-transitional curves on the diagonal start at a probability of 1.0 and decrease with distance and the off-diagonal curves start at zero probability and increase with distance. In both cases, the curves eventually flatten out at some distance. The probability corresponding to the flat part of the curve represents the mean proportion of the material. All curves on a particular column should flatten out to the same proportion. The proportions are displayed in the lower left corner of the dialog. The point where a tangent line from the early part of the curves on the diagonal intersects the horizontal (lag distance) axis on each curve represents the mean lens length for the material. The mean lens lengths are shown just to the right of the mean proportions in the lower left part of the dialog. The slope at the beginning of each of the Markov Chains represents the transition rate. Together, the proportions, lens lengths, and transition rates define the Markov Chains.

Several methods are provided for fitting the Markov Chains to the measured transition probability curves. These methods are listed in the section of the dialog titled Markov Chains. By default, GMS automatically makes an attempt to fit the curves using the Edit maximum entropy factors option. In many cases, this fit is sufficiently accurate and we can proceed to the next step. However, it is often useful to explore the other options for fitting the curves.

GAMEAS is an algorithm that processes borehole data and determines geologic characteristics such as material proportions and transition probability curves in a given direction. A separate window displays the details of the GAMEAS run, which allows monitoring the output from the GAMEAS simulation.

There are five alternate methods of generating Markov chains in this section (area in the Vertical Markov Chain dialog). These methods are in a radio-button configuration to allow changing from one method to another. Each of these five methods will be described.

where r1, r2, and r3 are the slopes defined by a straight line from the origin out to lag1, lag2, and lag3 respectively. As the lag approaches zero, more weight should be given to the corresponding slope. Hence, a weight of 0.57, 0.29, and 0.14 were assigned to r1, r2, and r3 respectively. Once the slopes are computed for each entry in the matrix, the mean lengths for each category are computed by:

Regardless of which Markov Chain option is selected, the background row and column, Sand_w/_fines, is dimmed because the values in this row and column are automatically computed from the remaining entries by probability constraints of the background material. In addition, with this option selected, the Lens Length column is also dimmed because the lens lengths are automatically computed and updated from the diagonal terms in the Transition Rates spreadsheet. The diagonal terms of the Transition Rates spreadsheet must be negative to obey probability rules. With this data, this method produces an accurate fit between the measured (green) and the Markov chain (blue) curves at small lag spaces.

With this option selected, the diagonal terms are dimmed because these values are derived from the values entered in the Lens Length column. Adjusting the proportions, lens lengths, or the off-diagonal terms in the Transition Rates spreadsheet alters the curves.

With this option, the spreadsheet in the lower right of the dialog represents the probability that the row material will transition to the column material moving vertically upwards in the +Z direction.

This option is similar to option #2, except embedded transition frequencies populate the off-diagonal terms of the Transition Rates spreadsheet. Embedded transition frequencies are also computed from borehole data when a simulation is initialized if borehole data exist. Once again, this is an intuitive framework with geologic knowledge including average mean lengths and depositional trends.

Fit curves to a discrete lag

This option is only undimmed if a transition probability curve from measured data exists in memory. When this option is selected, the Lag # edit field is undimmed to allow entering the discrete lag the curves will be fit to.

This option produces Markov chains that are computed from the measured transition rates produced by GAMEAS. GAMEAS computes a set of transition probabilities at each specified lag. This option computes an array of transition rates from the slope of the curves generated by GAMEAS (green). The transition rates correlate to the shape of the curve from the origin to the specified lag number in the Lag # edit field. Therefore, the cells of all the spreadsheets in the dialog are dimmed because the values are inherited from the measured curves (green). The values in the spreadsheets change depending on the lag # entered. By adjusting the lag interval, an excellent fit can often be obtained.