Each vessel coverage has at least one arc to define the boat path. The arc determines the vessel's starting position and starting speed, and where it will go from there. Additional segments can be added to the arc by adding vertices. Vertices add destinations but do not affect speed. To change the speed of the boat, convert a vertice into a node, and enter the node's attributes.

In general, there will always be exactly one path per vessel coverage. The path can be made up of multiple arcs, but the arcs should not split into multiple paths. The one exception to the rule of "one path per coverage" is when there are multiple vessels that are identical except for their speeds and paths. In this case SMS can have multiple separate paths in the same coverage, and each will create its own separate copy of the boat defined in the coverage properties. These paths can cross each other as long as they do not connect to each other (at a node).

Another option is to simply duplicate the coverage after the boat properties are defined. This allows adding and removing the boats from the simulation separately, and the boats can have vertices and nodes in the same place (same x and y coord) along their path without conflicting.

The boat path writes the FDEF and SDEF cards to the boat file. 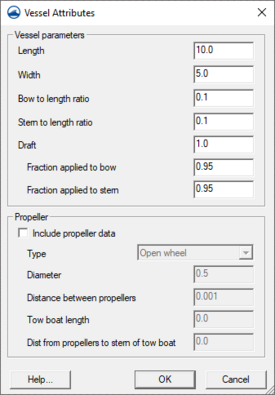 Each field corresponds directly to a card in the boat file.