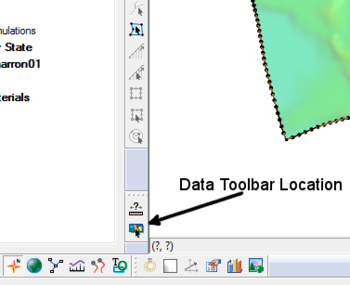 Default location of the Data Toolbar

The Data Toolbar contains tools to query or obtain data. Whether the toolbar appears at startup is set in the Preferences dialog.

The following tools are available:

At the bottom of the screen in the status message, SMS diplays the following:

The distance total length is also displayed in at the bottom of the Graphics window in the Coordinates Bar.

The units used to report the measured distance is specified on the Toolbars tab of the Preferences dialog—either the project unit as set in the Display Projections dialog or user-specified units.

The Get Data Tool

is used to specify the location of interest for obtaining data using the import from web feature. Click and drag in the main graphics window to specify the area to be downloaded. The Data Service Options dialog will then appear and the web service or catalog can be selected for downloading the data. SMS will ask to save the data file before downloading the data and importing it into SMS. The data will appear in the GIS module.