One common method for creating feature objects is to import a shapefile. The concept of a shapefile was established by Environmental Systems Research Institute (ESRI) in their ArcView® program and it has become the defacto standard for sharing GIS vector data (points, lines, and polygons).

Shapefiles contain data exported from ARC/INFO® or ArcView® in binary format. When they are imported into SMS, the data is converted to feature objects, points, arcs, or polygons. Shapefiles are opened through File | Open. Only map data can be saved out from SMS as a shapefile.

A shapefile is actually comprised of three or more files. The primary file is the SHP and it contains the geometric information (coordinates and if necessary connectivity of the points, lines, polygons). The DBF file is a standard database file and stores the attributes of the feature objects. Finally there will be a SHX file which is an indexing file. There may be a few other files that accompany the shapefile and so always move them around together if copying or moving them to a new directory.

Only one "theme" or type of feature can exist in a shapefile. For example it's not currently possible to store points and polygons in the shapefile, or streams and basin boundaries and so it may be required to import multiple files to make up the drainage coverage in SMS.

When a shapefile is opened, the Import Shapefile Data dialog appears. It is necessary to know if the file is a Point, Arc, or Polygon shapefile. The options in the dialog are: 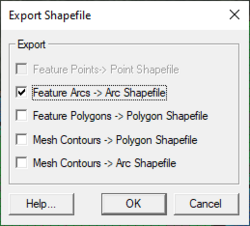 Data created in SMS can be exported as a shapefile. To export feature objects in a map coverage to a shapefile (*.shp):

Shapefiles are created for the selected feature object types.

Open the saved XML file to import the data from the shapefile.