Feature objects in SMS have been patterned after Geographic Information Systems (GIS) objects and include points, nodes, arcs, and polygons. Feature objects can be grouped together into coverages. Each coverage defines a particular set of attributes that store information for the objects. Since feature objects are patterned after GIS objects, it is possible to import data from GIS applications such as ESRI Shapefiles (Arc/Info or ArcView) and MIF/MID file pairs (Map Info).

The primary use of feature objects is generate high level conceptual representations of a site. The area included by the polygons defines the domain of the mesh, grid, or limit the extents of cross sections. Each polygon represents a material zone or element type. Special points can be identified in the interior of the domain as areas of particular interest. Boundary parameters such as flow and head values can also be assigned to points or arcs. Depending on the numerical model to be used, SMS either passes this conceptual representation to the model, or constructs finite element meshes, finite difference grids, or one-dimensional cross sections that a numerical model will use. Thus, it's possible to focus on a simplified, high level representation of the model and little or not tedious cell-by-cell editing is required. The conceptual model approach can be used to build models for any of the numeric models supported by the SMS interface. 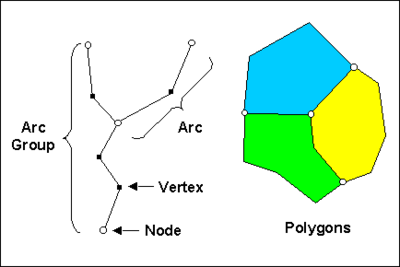 The definition of feature objects in SMS follows that used by typical GIS software that supports vector data. The basic object types are points, nodes, vertices, arcs, and polygons. The relationship between these objects is illustrated in the figure below.

Points are XY locations that are not attached to an arc. Points have unique ids and can be assigned attributes such as a source or sink. Points are often used to refine a mesh in an area of interest. Points are also used when importing a set of XY locations for the purpose of creating arcs or polygons.

Arcs are sequences of line segments or edges, which are grouped together as a single "polyline" entity. Arcs have unique ids and can be assigned attributes such as specified head. Arcs are grouped together to form polygons or are used independently to represent geometrical features such as ridges or channels. The two end points of an arc are called "nodes" and the intermediate points are called "vertices".

The vertices in an arc define the shape. As more vertices are added, the shape can be more complex. An arc is split into to arcs by selecting a vertex in the arc and converting that vertex to a node. Two adjacent arcs are merged into a single arc by selecting the node that joins them, and converting it to a vertex. Several tools or utilities are provided for working with arcs. These can be accessed while the select arc tool is active by right-clicking in the graphics window. Some of the tools also require that at least one arc be selected. The tools include:

Nodes define the beginning and ending XY locations of an arc. Nodes have unique ids and can be assigned attributes.

Vertices are XY locations along arcs in between the beginning and ending nodes. They are used solely to define the geometry of the arcs. Vertices do not have ids or attributes. 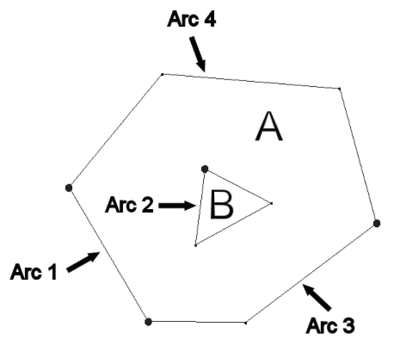 Polygons are a group of connected arcs that form a closed loop. A polygon consists of one or more arcs. If two polygons are adjacent, the arc(s) forming the boundary between the polygons is shared (not duplicated). Polygons may not overlap. However, a polygon can have a hole(s) defined by having a set of closed arcs defining interior polygon(s). An example of a hole is shown in the figure below. In this case, four arcs define two polygons. Polygon A is made up of arcs 1, 2, 3 and 4, whereas polygon B is defined by a single arc (arc 2). For polygon A, arcs 1, 3, and 4 define the exterior boundary whereas arc 2 defines a hole.

Polygons have unique ids and can be assigned attributes. Polygons are used to represent material zones such as main channel, overbank floodplain, lakes, etc.

Coverages are grouped into conceptual models. Conceptual models may consist of multiple coverages. In simple cases like TABS (RMA2), an "RMA2" meshing coverage may be combined with an "Area property" coverage to define material zones. When converting an RMA2 coverage to a mesh, SMS allows specifying this option. For more complex conceptual models, such as those used for TUFLOW, a simulation entry in the tree includes links to the component coverages. A TUFLOW simulation may have coverages for HX links, cross section, boundary conditions and levies.