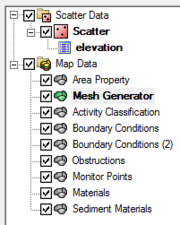 Example of coverages in the Project Explorer 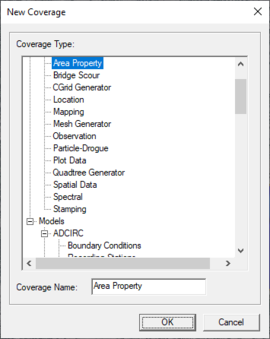 A new coverage can be created by right-clicking on the "

Note: Apostrophes and other special characters are not allowed and may cause an error if included in the coverage name.

Right-clicking on a coverage brings up a menu with the following options:

Occasionally, its desirable to hve independent features of two separate coverages combined into one converage. SMS allows merging these two coverages together. Select one of the coverages listed in the data tree then multi-select the other coverages to be merged. This can be done one at a time by holding the CTRL key, or several adjacent coverages can be selected by holding the SHIFT key and then clicking the last adjacent dataset.

Once all datasets to be merged have been selected, access the right-click menu and chooses Merge Coverages. A dialog may appear asking if wanting to delete the coverages used to create the merged coverage.

Coverages are grouped into two categories: