Feature objects can be converted to other data types in SMS such as meshes, grids, scatter sets and cross sections. This can be accomplished by either right-clicking on a coverage in the project explorer and selecting a convert command or by selecting the following commands from the Feature Objects menu:

The Extract Cross Sections command uses the cross section arcs and a digital terrain model (TINs are the only source that can currently be used) to extract the elevations at vertices of the feature arc cross-sections, or at the intersection points with the triangles.

Cross Sections for individual arcs may be extracted by selecting the arc(s) before choosing the Extract Cross Sections command. If not cross-sections are selected then the Use All Cross Sections option is used.

Point properties (thalweg, left bank, right bank) can be defined from a 1D-Hydraulic Centerline coverage, or by AutoMark. The AutoMark option will examine the elevations of the extracted cross sections and try to infer the thalweg (low point) and the left and right bank points (change of slope) automatically.

Line properties can be determined from an area property coverage by intersecting the cross-section arcs with the area property polygons and marking them in the cross section database.

Once a set of feature objects has been created for a coverage (conceptual model) associated with a finite element based model such as RMA2, FESWMS, ADCIRC or CGWAVE , the Map → 2D Mesh command can be used to generate a 2D finite element mesh from the objects. The Map → 2D Mesh command creates a 2D mesh on the interior of all of the polygons in the current coverage. The figure domain of a floodplain using the feature objects in the Map Module. The second figure shows a 2D mesh created from the polygons.

The recommended method for creating unstructured grids (meshes) in SMS for use with either finite element or finite volume engines is to use the conceptual modeling approach. This method includes the following general steps:

When using the Map → 2D Mesh, 2D grid → 2D Mesh, or Scatter → 2D Mesh commands, the Mesh Name or New Mesh Name dialog will appear. SMS requires that every mesh created be named. These dialogs give the option to enter a user specified name. A default name will be entered in the dialog and used for the new mesh if a new name is not specified. 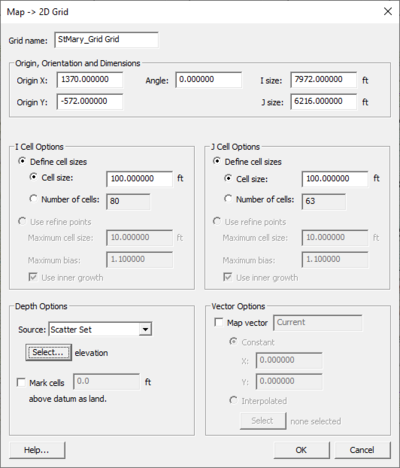 When specifying Define cell sizes, there are a few options available. These options are:

Refine points for a Cartesian Grid allow changing the cell dimensions when generating the grid. They are not available for all models, since some Cartesian Grid models require uniform cell sizes. Specify whether to refine in the I and/or J direction and the base cell size for each direction.

When the refining is performed, the base size may be changed in order to fit the other restrictions applied to the refining process. If two refine points are too close to each other to allow the cell size to transition, one will be ignored when generating the grid. See Refine Point Dialog for more information.

In addition to the options specified on the grid frame, depth and vector interpolation options can be specified during the mapping process for some models. The depth mapping is required for all models, while the vector mapping is optional even for the models it can be performed on. Depth and vector datasets can be constant or interpolated from a scatter set.

Cells with a user specified tolerance above the datum can be marked as land (inactive) cells. This option is on by default for BOUSS-2D, but defaults to off for other models.

When specifying a constant vector, the X and Y components are oriented based on global space, not grid space. 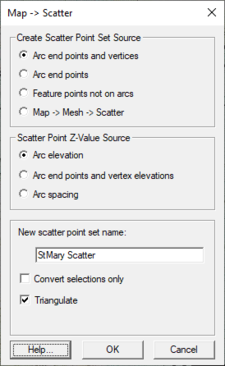 The dialog has three main sections which are detailed below.

Create Scatter Point Set Source – This section defines which feature objects will be converted to the new scatter set.

Scatter Point Z-Value Source – This section defines what data in the map coverage will be converted to the new scatter set.

Older versions of SMS included an option to convert one of the measurements associated with an observation coverage to a dataset on a scatterset. This utilized the Observation Points → Scatter Points dialog. To accomplish this in versions of SMS newer than SMS 10.2, copy the observation spread sheet into Excel and save the data as a text file. Importing this file into SMS will allow creation of a scatter set of observed (measurement) data.

This section of the dialog is only available if the selected measurement is transient. It allows defining the number of time steps, and the time step times to be created for the scatter point dataset. 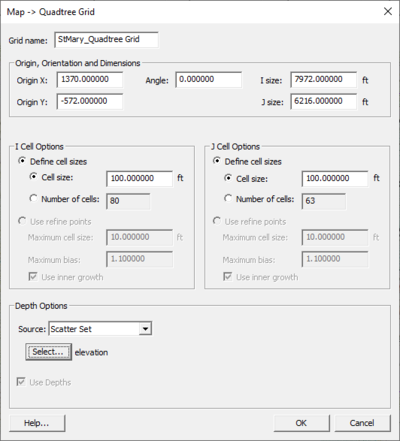 Parameters specified to create the quadtree grid include:

SMS will generate a quadtree on the input parameters.

The Map → UGrid command converts feature objects to a UGrid. The command is found by right-clicking on the map coverage. A dialog will appear allowing the new UGrid to be named. The name should not include apostrophes or special characters.

The process used in the conversion is similar to how SMS converts feature objects to a 2D mesh. Polygons must exist in the map coverage before converting to a UGrid.

When converting a GenCade coverage to a 1D grid using the Map→1D Grid command, the Map→1D Grid dialog appears. The dialog allows setting the origin, angle, and cell size of the 1D grid. 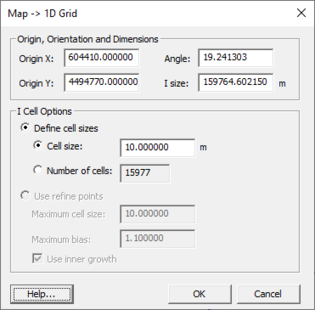