MODPATH pathlines can be exported from GMS in a few different ways:

The MODPATH | Capture Zones → Arcs command will convert the capture zone outline to feature arcs, creating a separate coverage for each well. Coverages can be exported as a shapefile or converted to CAD data. Capture zones are defined using the Delineate by well and Delineate by zone code options in the MODPATH Display Options dialog.

in the Project Explorer, a new 3D scatter point set will be created from only that particle set.

Pathlines can be exported by right-clicking on a particle set in the Project Explorer and selecting the Export option. This saves the pathline geometry to a tab-delimited text file that can be imported directly into Excel: 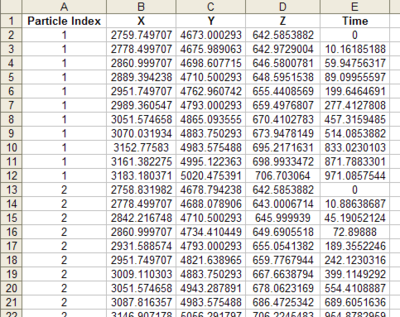 Right-clicking on the particle set data

folder and selecting the Export command will generate tab-delimited text file with all particle sets in the data folder included in the file.