When the Horizon→HUF command is executed the horizons specified on the borehole contacts or TIN nodes are converted to a set of scatter points with one dataset for each horizon. The scatter points are then used to interpolate a surface for each horizon. Starting with the lowest numbered horizon, the surface is extruded down to create a HUF layer The surface corresponding to the next horizon is then extruded down to fill in the space between that surface and the previous surface. This process is repeated for each surface. At each step, HUF layer is created for the current horizon and all previously layers are subtracted from that layer, resulting in an incremental buildup of the stratigraphy from the bottom to the top. In conclusion the HUF package elevation and thickness arrays are generated from the horizon data. 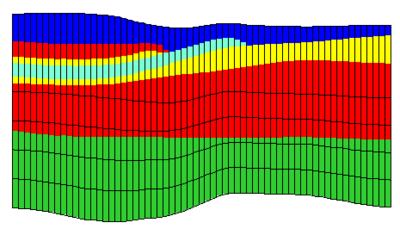 Example of Horizons to HUF