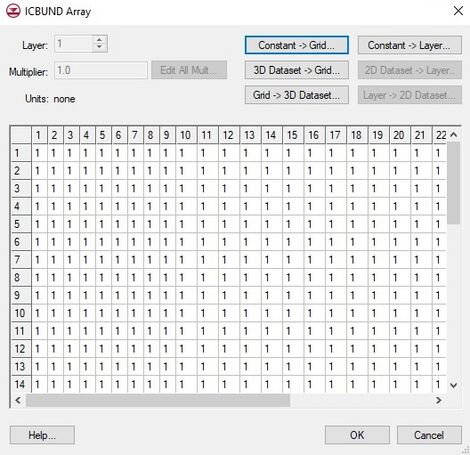 The ICBUND array contains a value for each cell in the grid defining the type of the cell as either constant concentration, inactive, or variable concentration.

Inactive
An ICBUND value of zero indicates that the cell is inactive.

If the Activate Cells in Coverage command in the Map module is used to change the active/inactive status of the cells, both the IBOUND and ICBUND arrays are updated accordingly.

If a cell is designated as inactive, it is hidden when the grid is displayed, unless the Inactive cells option is selected in the 3D Grid Display Options dialog, in which case the inactive cells are displayed, but in a different color. If neither MODFLOW nor MT3DMS is in memory, the default 3D grid active/inactive flags are used to control the display of the grid. If MODFLOW is in memory, the active/inactive status of the cells as defined by the IBOUND array is used to display the grid. If both MODFLOW and MT3DMS are in memory, the ICBUND array takes precedence and is used to display the grid.