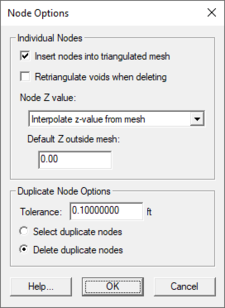 Parameters governing the creation and manipulation of nodes are set using the Node Options dialog, which is opened by selecting the menu Nodes | Options.

When deleting a node is deleted, all elements attached to the node are also deleted. The void in the mesh left by the deleted elements can be automatically filled by triangulating the surrounding nodes. If this option is turned off, then the void will remain.

If the Retriangulate voids when deleting option is turned on, the void created when a node and the elements surrounding the node are deleted is re-triangulated or filled in with triangles. This feature makes it possible to selectively "unrefine" a region of the mesh or reduce the density of the nodes in a region of the mesh without having to completely recreate all of the elements in the region.

When deleting selected mesh nodes, if the node count exceeds ~1000 there will be a noticeable delay if the Retriagulate voids when deleting box is checked.