An ADCIRC weir is a boundary type that are assigned to two nodestrings on an ADCIRC mesh. A weir comprises of two nodestrings next to each other with an equal amount of nodes on each nodestrings. In order to add a weir in ADCIRC, there must be two adjacent nodestrings available as shown in figures 1 and 2 below.

The number of nodes on each nodestrings must be of an equal amount or a weir cannot be assigned. See figure 3 below. Each node and it's corresponding node on the parallel nodestring will form a node pair. 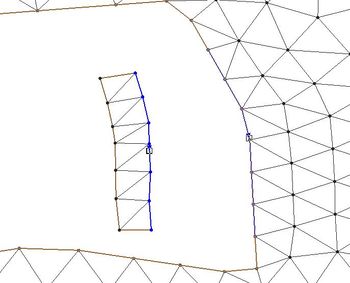 Once two nodestrings with same number of nodes exist, they can be assigned as a weir by selecting both weirs and selecting Assign BC. The Nodestring attributes will open. By selecting Weir and then clicking on the Parameters button, the Weir Options dialog will open. The dialog shows the different Node pairs and elevation for each node pair. 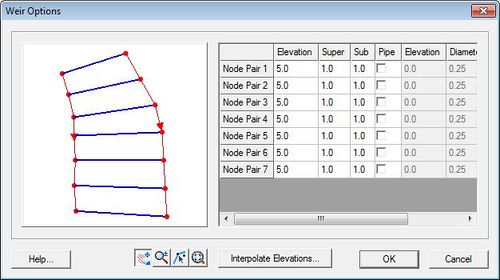 Example of the Weir Options dialog.

Weir flow coefficients for super critical flow. A typical value for this is 1.0.

Weir flow coefficients for sub critical flow. A typical value for this is 1.0.

– L is the length of the pipe
– D is the hydraulic diameter of the pipe (for a pipe of circular section, this equals to the internal diameter of the pipe)
– f is a dimensionless coefficient called the Darcy friction factor. It can be found from a Moody diagram or by solving the Colebrook equation.

Clicking on the Interpolate Elevations button opens the XY Series Editor. The XY Series Editor can be used to generate and edit curves defined by a list of x and y coordinates. The curve can be created and edited by directly editing the xy coordinates using a spreadsheet list of the coordinates. An entire list of curves can be generated and edited with the editor and curves can be imported from and exported to text files for future use. It is also possible to paste the xy data directly to the spreadsheet. 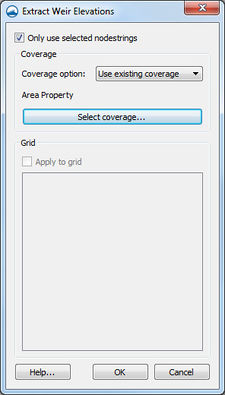 Data entered in as a weir or island barrier boundary condition for ADCIRC define the crest elevation between the nodes. This elevation data is independent from the elevation of the nodes on the grid (usually it is assigned from a separate source).

SMS includes tools to incorporate these elevations into a Cartesian grid that will be used in a different model and/or a coverage. These tools are accessed by selecting the Extract Weir Elevations... command in the Nodestrings menu. This command is not available unless there is an ADCIRC mesh loaded into SMS.

After selecting OK in the dialog, SMS will compute elevations at the midpoint of each node pair in the BC. This is done by first interpolating between the node elevations of each pair, and then subtracting the weir/barrier elevation (which were specified in the weir or island barrier parameters) from that value.

If the coverage option is used, SMS will create arcs that represent the weirs or barriers on the specified coverage. The computed elevations will be assigned along the arc. If one or more grids are used, SMS will set the elevation values for all grid cells that lie underneath the midpoints to match the computed values.

Selecting two nodestrings that have been assigned a weir boundary condition allows using the Remove Weir command in the right-click menu. Using this command will bring up the Remove Weir dialog. This dialog gives the following options for removing the weir: 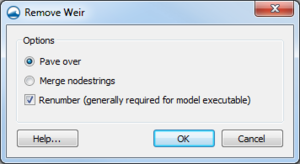 The Add Weir dialog in ADCIRC