TUFLOW models use several types of Feature coverages. Coverages are used in SMS to represent geometry and associated attributes as points, arcs, and polygons. Unlike some models used in SMS, TUFLOW uses coverage data as model inputs.

In addition to the coverages listed below, TUFLOW models can use Area Property coverages to define where to use specific material properties using polygons.

A TUFLOW 2D Grid Extents coverage is used to create TUFLOW grids. TUFLOW grids are generated by creating and positioning a Cartesian grid frame and then right-clicking on the coverage and choosing Map→2D Grid.

Polygons can be used to define rainfall applied to 2D domains or to specify active/inactive information for 2D domains. The BC Polygon Attributes dialog specifies the type of information stored with the polygons (see 2D Boundary Conditions at Polygons).

On this coverage polygons can be created to define material areas. This is the same as the Area Properties coverage.

1D–2D connections are used with the 2D Boundary Condition coverage to link 2D and 1D domains.

Two types of arcs can be created in a 1D–2D Connection coverage: 1D/2D connection arcs (CN) and Flow vs. Head Connection arcs (SC). The type of arc is assigned by selecting the desired arc and using the Feature Objects | Attributes command to bring up the Arc Attributes dialog for this coverage. Designate the arc Connection type in the dialog. There is also an option to apply Weighting to 1D–2D connection arcs. Weighting sets the proportion to be applied in distributing the water level from the 1D node to the 2D cell.

The coverage has a couple coverage specific commands that appear when right-clicking on the 1D–2D Connections coverage. The commands are:

Cross section coverages are used to define open channel cross section data for 1D networks. Cross section geometry is generally extracted from a TIN and may be edited by hand if desired.

This coverage has a few unique commands available when right-clicking on the coverage in the Project Explorer. The commands are:

Individual cross sections may be viewed and edited by double-clicking on an arc, or by selecting an arc and choosing Feature Objects | Attributes. This will bring up the Cross Section Attributes dialog. 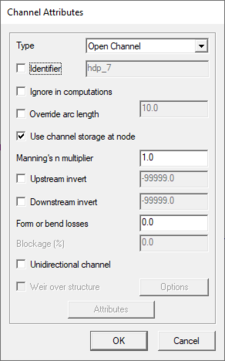 1D domains are made up of a network of channels and nodes. Channels represent the conveyance of the flowpaths and nodes represent the storage of inundated areas (TUFLOW Users Manual). Channels are created using arcs and the arc endpoints are the nodes.

There are two types of nodes generic nodes, and inlets. Generic nodes can be used to specify storage and can be used to set channel invert elevations. Inlet nodes are used to get flows from a 2D domain into a 1D pipe network below the 2D domain. The node type and attributes are defined in the Network Node Attributes dialog reached by selecting a node and using the Feature Objects | Attributes command.

The TUFLOW documentation sections "5.12.4: Connecting Pits and Nodes to 2D Domains" and "5.4: 1d_nwk Attributes" list some new TUFLOW features that SMS now supports. SMS's Network Node Attributes dialog has several new additions to the Create Connection to 2D Domain (SX) section. These new options allow controlling elevations at the connections, how many cells are connected, and the method for selection of additional cells (Grade or Sag). Each option correlates fairly directly to a TUFLOW field and some are labeled as such to make look-up easy.

The coverage also has a few unique commands accessed by right-clicking on the coverage in the Project Explorer. These are:

Any number of grids of varying sizes and/or orientations may be used in TUFLOW. A 2D/2D Linkages coverage is used to setup TUFLOW to use multiple 2D domains.

Polygons are created on this coverage that enclose each domain. Then each polygon can be assigned to a domain by using the Feature Objects | Attributes command to bring up a Select TUFLOW Grid dialog.

Note that this coverage is different from the older (and outdated) 2D Flow Constriction coverage, which is still supported.

Spatially varied attributes can be defined using the 2D Miscellaneous (FLC, WRF, IWL, SRF and AD) coverage. When creating this coverage, the coverage type needs to be set in the Coverage Properties dialog. This dialog can be reached by right-clicking on the coverage in the Project Explorer and selecting the Properties command.

The available spatial attributes are:

The values for the attributes are assigned to polygons created in the coverage. TUFLOW assigns the values from the polygons to the cells that exist within the polygon. Selecting a polygon and using the Feature Objects | Attributes command will being up a dialog with the value can be assigned. The name of the dialog will match the coverage property type.

The 2D Z Lines (Advanced) Coverage allows modifying terrain along an arc or arcs, but has additional options. With the 2D Z Lines (Advanced) coverage, modify geometry through time to simulate levee failures or other changes to elevation data within the model run. These changes are set up start when a "trigger" is activated such as at a specific time during the simulation or when water depth exceeds a certain amount. An example application is a levee collapsing when flood water overtops it. 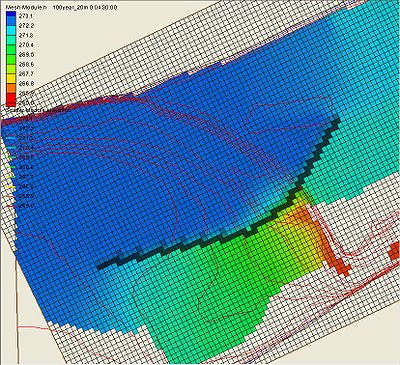 TUFLOW also supports the features described above using polygon ZShapes. However, SMS does not support polygon ZShapes using these advanced features (such as triggers) at this time. If necessary to create static modifications to terrain using polygons, use the 2D Z Lines/Polygons (Simple) coverage.

The 2D Z Lines (Advanced) coverage is available under the models/TUFLOW folder. ZShape data is stored in a feature arc's attributes. The Z values of the feature arc's points determine its Z, not the Z of the arc itself (exceptions to this are explained in the Arc Properties Dialog article).

ZShapes are split into two main categories, Static ZShapes and Variable ZShapes. Static ZShapes are simple terrain modifications that do not change over time. They can be used to create a levee, pit, sand bar, dam, etc. Variable ZShapes have a trigger that causes them to raise or lower the terrain during the simulation. Often a variable ZShape is combined with a static one to provide raised terrain for the trigger to modify. This is necessary because a variable z shape cannot raise the same area it intends to lower when its trigger activates -- it needs the terrain to already be there and cannot create it itself, only modify once its trigger activates.

These coverages are used as geometry modifications and force grid elevation values using arcs or polygons. This can be useful to ensure ridge or gully lines are represented in the model, simulate a proposed levy, or to simulate a proposed fill/excavation scenario.

It is possible to only have the elevations assigned from a feature object if the feature elevation is higher or lower (user specified) than the existing elevations in the grid. This is controlled in the 2D Z Lines/Polygons (Simple) Coverage Properties dialog (right-click on the coverage and choose Properties). The options specified in the coverage properties dialog apply to any geometry modification arcs and polygons within the coverage. If wanting to use multiple settings within a simulation, there must be multiple 2D z line/polygon (simple) coverages.

The z values determine how the elevations in the coverage are used to modify the existing model elevations. The options are:

Make sure the coverage is in the Geometry Component(s) that is to be applied to the modification.

Points
Points are ignored in the geometry modification coverage.
Arcs

TUFLOW Choose Arc Type dialog
Only the elevations at the nodes (endpoints) are used to set the grid elevations. Vertex (intermediate) elevations are ignored. Cell elevations along the arc will be interpolated linearly based on distance from the endpoint elevation. If wanting to specify elevations at vertices on an arc, convert the arc vertices to nodes to create multiple arcs joined end to end.
Polygons
To set the elevation for polygons double-click on the polygon and enter the elevation in the Polygon Elevation dialog. This elevation will be applied to all cells within the polygon. This dialog can also be accessed by right-clicking on a polygon and selecting Attributes for the right-click menu.

Right-clicking on the coverage in the Project Explorer has the following option:

Water level points store a material value. This material value along with the z location of each point is used by TUFLOW to better approximate 2D flow along a water level line. TUFLOW performs a parallel channel analysis so that flow rates reported in the 2D output vary based upon the depth and roughness of a channel. Areas that are more rough and shallow than other areas will have a smaller flow rate than other areas along the same water level line.

The material value for each point can be mapped from an area property coverage by right-clicking on the coverage tree item and selecting Materials for Area Coverage. By default the elevation of each point is based upon the neighboring cross section information.

The initial water level points coverage data is created by TUFLOW during a run. Once a run has been completed, the data can be read from the check file that starts with the simulation name and ends with _WLLp_check.mif (see TUFLOW check files). Open this file from SMS and select TUFLOW WLL Points from the combo-box that comes up. This coverage now can be included in simulations to provide additional guidance to TUFLOW in distributing 1D flows.