The items in the STWAVE menu in the Cartesian Grid Module are described below:

The STWAVE menu has the following commands:

The following commands are no longer available in current versions of SMS. 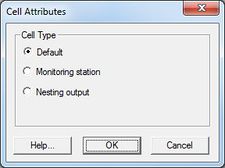 The STWAVE Cell Attributes dialog is used to assign a cell type to selected Cells. It is opened using the menu command STWAVE | Assign Cell Attributes. The following cell types can be assigned:

Cells are no longer assigned as Land or Ocean types but are assigned as Default where their elevation values are used to simulate whether flow exists or not. If no elevation data is available for part of the grid area, it is important to specify an extrapolation value of a negative number. Extrapolation values can be specified in the Interpolation dialog while doing Map → 2D Grid.

Spectral output is generated for nesting output cells cells to be used as input for a nested child grid.

The symbols and colors used to identify the attributes assigned to cells can be changed in the STWAVE Display Options.

After a simulation has been read or saved, SMS can launch the finite element analysis engine. To run STWAVE:

A window will appear which displays various information as STWAVE runs. Normally it is not necessary to type anything in this window. If the window prompts for file names, an updated version of the STWAVE model executable is needed. When STWAVE has finished, a prompt will ask to press the ENTER key. If the window goes away before doing this, STWAVE encountered a problem and crashed.