The time series is similar to the XY series with a few differences.

The time series assumes that all angles used are specified in the cartesian system. 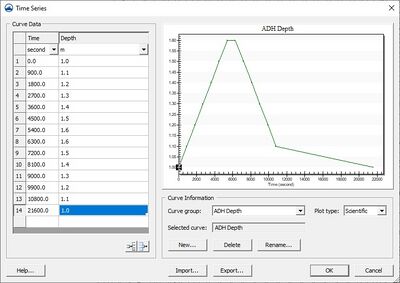 Curve group field specifies the current group. This may be a combo box (depending on how the window is accessed) which allows the other groups to be selected.

New... button adds a new curve to the current curve group and opens a window in which the name of the new curve is specified. The name will appended if necessary to ensure uniqueness within the curve group. The new curve will be selected and appear in the Selected curve field.

Rename... button opens a window to specify a new name for the selected curve. This button is only enabled if a selected curve exists.

Plot type field specifies the current plot format. The available plot types are determined by the format of the current time series. The options for displaying the plots are as follows:

Various plot options, such as legend style and numerical precision, are accessed by right-clicking on the plot. It is important to note than when plotting data, the first column of the time series is always assumed to be the X values. This field is only enabled if a selected curve exists.

Spreadsheet lists the data of the selected curve. The column types are determined by the current curve group.

Insert New Row Above and Delete Row(s) toolbar assists in editing the spreadsheet rows. The tools are only available if there is a valid cell selection that excludes the title, units, and empty rows.

Reference time field specifies the date and time the selected curve begins out. This field is only visible if one of the curve groups available (listed in the Curve group field) allows time referencing and the field is enabled if the current curve group allows it.

Show dates check box specifies whether the time values of the curves are displayed in the spreadsheet as date and times instead of offsets from the reference time. This control is visible and enabled based on the same requirements as the Reference time field.

Miscellaneous (Outside of any group)