An image is typically a scanned map or aerial photo in TIFF, PNG, or JPEG format. Images can be imported to GMS and displayed in the background to aid in the placement of objects as they are being constructed or simply to enhance a plot. Images can also be draped or "texture mapped" onto a TIN, 2D grid, 2D mesh, or the top of a 3D grid or 3D mesh. 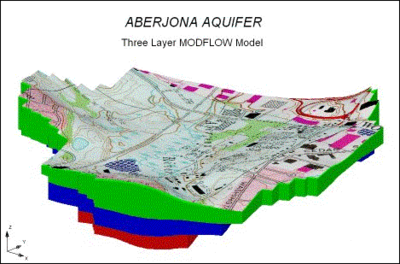 Scanned USGS Quad Map Texture Mapped to the Top of a 3D Grid.

Getting Images via Online Maps

Free imagery can be obtained from the internet via the Get Online Maps feature. A local image file can be created from an online map via the Export command.

Image pyramids can be created when an image is imported into GMS. Image pyramids are multiple resolution copies of the original image that are created and saved to speed up display. With pyramids, a lower resolution copy of the image displays quickly when drawing the entire image. When zooming in, copies of the original image resampled at finer resolutions are then drawn. This option allows for optimal performance and clear image display.

GMS allows more than one image at a time; however, when doing so make certain that each image is in the same coordinate system.

Some images have the coordinate system embedded in the file. Also, some images will have a separate file called a world file (for example: a TIFF world file, *.tfw). These files are "geo-referenced." When these files are opened GMS automatically registers the image to the real world coordinate location specified. In the case where a separate world file is used, GMS will automatically find it and register the image if the world file has the same filename prefix as the image file and is in the same folder.

If the image file is not geo-referenced then register the image manually. (See Registering an Image)

When the GMS project is saved, a link to the image is saved in the project file, along with the current image registration information so that the image is re-registered to the same coordinates every time the project is opened. The original image file and world file (if one exists) are not altered.

An image can be exported by right-clicking on the image in the Project Explorer and selecting the Export command. When exporting, the image file type and the resolution can be specified. Only the image which is open in GMS is exported, not the entire Graphics Window.

The entire Graphics Window can also be saved to an image file via the File | Save As command. A number of different image file types are supported such as: BMP, PNG, JPG, and TIF.

The Image Properties dialog can be opened by double-clicking on an image in the Project Explorer. This dialog displays information about the image, such as name, path, type, pixel size, etc. 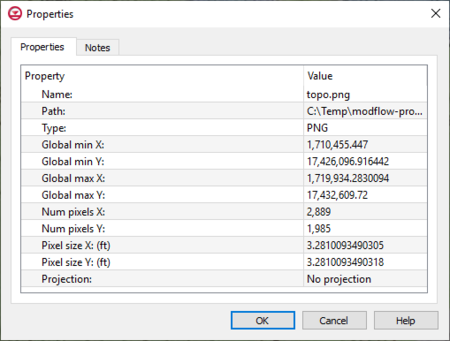 Example of the Image Properties dialog

Most raster data has a projection and coordinates (X, Y, and possibly Z locations of each raster cell) associated with it. The projection contains information about how to map the coordinates in the raster to actual horizontal and vertical locations on the surface of the earth.

When loading an image or a raster, GMS, SMS, or WMS (referred to collectively as XMS) determines the horizontal projection using GDAL. This will be based on either a projection file (*.prj) or internal projection information in the raster.

If vertical projection information (vertical datum and units) is available for the image or raster, XMS reads the information and stores it internally.

If changing any projection information for a raster loaded into the a project, the XMS software saves a new raster in GeoTiff format.

Occasionally, a raster will exist that does not contain elevation data (for example, concentration values). In this case, XMS stores a metadata flag (read only by GMS, SMS, and WMS) with the raster stating that the raster does not have elevation units. When this metadata flag is found by XMS, none of the vertical values are reprojected after reading the raster.

XMS uses GeoTiffs to export rasters with horizontal and vertical projection information for use in other GIS programs.

Saving Projection Information with a Raster