Feature objects in the Map module are grouped into coverages. A coverage is similar to a layer or level in a CAD drawing. Each coverage represents a particular set of information. For example, one coverage could be used to define drainage boundaries and another coverage could be used to define land use or soil zones. These objects could not be included in a single coverage since polygons within a coverage are not allowed to overlap. 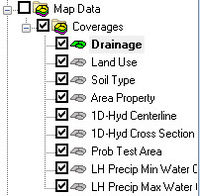 A new coverage can be created by right-clicking on a folder and selecting the New Coverage command in the pop-up menu. 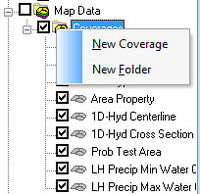 Right-clicking on a coverage bring up a menu with the following options: Delete, Duplicate, Rename, and Properties. 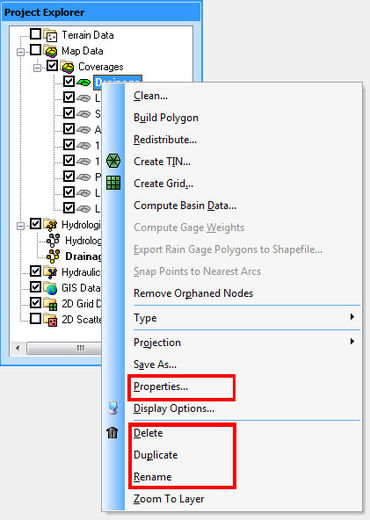 The Properties command brings up the Coverage Properties dialog. The coverage properties dialog allows specifying what the coverage type is, its default elevation (mostly used for displaying and overlaying) and change the name (although the name of the coverage can also be changed from the Project Explorer in the same fashion as changing a name in a typical Windows Explorer.